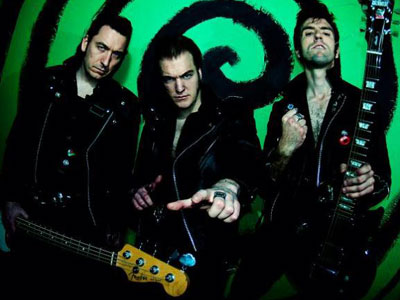 Calabrese III: They Call Us Death!

Take three brothers from Phoenix, AZ., add the suspense of a horror movie, the bold vocals of rock-and-roll, fast paced instruments used in punk-rock tradition, trance-like lyrics of death, werewolves and your deepest fears. Stir it all up, and the end result is They Call Us Death by Calabrese.

Brothers Jimmy, Davey and Bobby power the spine-chilling monster that is Calabrese. The band, although currently on tour, keep in touch with fans through social networking sites such as MySpace, Facebook and Twitter. Calabrese is so interactive with their fans that they held a contest to name this album.

They Call Us Death is Calabrese’s third full length album, a follow up of 13 Halloweens, andThe Traveling Vampire Show.  Creating images of damsels seeking vengeance and frightening lyrics of the fight for immortality, Calabrese is “the world’s greatest horror punk band.” With leather jackets, slick hair, and a love for keeping horror classics alive, Calabrese is becoming a cultural phenomenon, using haunting rhythms and restless vocals that could charm Dracula and Frankenstein to become fans- if they existed. “I want people to be energized into madness! I want our CD to feel like twenty cups of coffee! I want people to go nuts!” says Bobby Calabrese

They Call Us Death has darker lyrics and continued use of classic horror movie icon voices in catchy demonic melodies. A couple personal favorites of this album are Violet Hellfire andLoveless God. This new album is busting a wide open door for a new breed of horror-punk fans with Calabrese poised as super heroes- and a comic book in process. The colorful art inside and outside of this CD, are uniquely personalized to the brothers’ plan of world dominance. (Did I mention their distinctive sense of humor?)

Calabrese’ music is not distributed by giant companies. They became known to the Yuma music scene during a performance in Prison Hill Park, a few years back. Tracks like Near Twilight, Deep in the Red, and Within the Abyss, to name a few, continue to evoke the dead.

If you are interested in polluting your eardrums and selling your soul to the great terror that is Calabrese, feel free to view the band’s official website at www.calabreserock.com and MySpace page at www.myspace.com/calabrese.

They are on tour now!