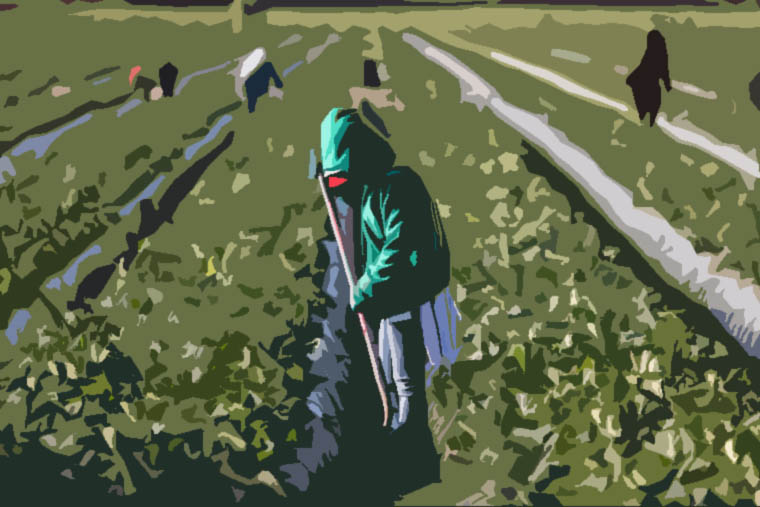 . Praise is given to Mexican immigrants because of their ability to perform hard labor while in hard conditions.  But little thought is given to how they find a temporary place to call home while saving money to take back to their families in Mexico.

While these people are trying to save the most money and lower their daily expenses as much as possible, this is almost as hard as the labor they do.  If these workers spend their money on rent for a house or apartment, that takes a mayor part of their resources.  For this reason, the search for a backroom or trailer is a common practice among them.

The reason for their desire to come work in U.S. fields has to do with the pay difference in between Mexico and the U.S.

“The salary in Sonora is $141 pesos [about $7] a day, and the minimum salary in Arizona is $12.15 an hour,” said Juan Contreras, a field worker who travels between Yuma, Ariz., and Salinas, Calif., following seasonal work.  “You’d have to be crazy to prefer to work in Mexico when you have the ability to come work over here.”

“The job is a bit harder over here, but the difference in salary is the difference in between my kids having to sell bracelets to tourists and the ability for my kids to go to private school, which might be equal to a public American education,” said Miguel Arciga, a field worker who only does field work in Arizona.

Their sacrifice of leaving home to work though can only be worth it if they don’t spend their money in the U.S.  Therefore, they are willing to live in 50-square-foot rooms their whole season, without even air conditioning during the summer.

“I do rent here because I live all the way near El Golfo De Santa Clara, which is about two hours away from here [Yuma].  I’m trying to save money, so there is no way I am going to pay for a five-star stay here,” said Ruben Cordova, a Yuma County field worker.  “I don’t mind the heat.  All I need to survive the heat without AC is a cold beer.”

Some people rent their backrooms for around $200 a month, $400 for a trailer, according to Cordova.

Some instead stay in their homes across the border in Mexico and walk across every single day in the early morning to save on this rent.

“I’d rather cross every day for work to save that rent money,” said Arciga.

Lines into the U.S. can sometimes get up to three hours, and then the laborers are sometimes forced to sleep up to six hours on street benches to wait for the work buses to take them to the fields, according to Arciga.

Every dollar they get to save is a dollar their family gets to benefit from back home.

. “My kid’s futures are my main priority,” said Arciga.  “If I have to have aching feet and legs at the end of the day, I know it’ll be worth it someday.”

Despite their efforts for their selfless cause, some are demonized for supposedly stealing American jobs.

“I stopped caring what some racist white people say about me and my people,” said Cordova.  “I’m stealing no one’s jobs. Those lazy asses go one day, quit after, and when we get the job they complain.  I’m here providing for my family legally.”

Cordova has a worker’s visa, which means he’s here legally and is not stealing American jobs.

“I know I’ll be able to bring my family here legally one day,” said Cordova.  “It’s not worth it to be here illegally because, if you get caught and have stuff here, then you’ll lose it all. I just have to keep working until I save enough to bring them over with me, but for now all I can do is send them like 90 percent of my salary.”