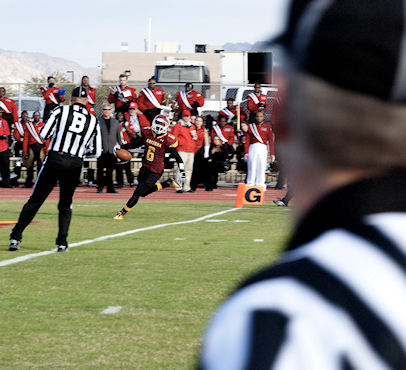 The Arizona Western College Matadors football team was defeated by the East Mississippi Lions, 47-55, at the NJCAA El Toro national championship game on Dec. 3 in front of the first-ever sold out crowd of 5500 spectators at the Yuma home venue, Veteran Memorial Stadium.

Disappointed as they are in the loss, the fact remains, the Mats made it to the Championship game for the first time since 1973. They end the year with the first 11-win season in the program's 47-year history

"This is something they will never lose; no one can take that away from them," said Arizona Western College President Glenn Mayle during a pre-game interview with Jim Howell.

The rest of the first half was extremely painful to watch for AWC fans. Penalties and missed cues were key factors in helping the Lions build an insurmountable lead.

"The Mats had trouble containing their emotions in the first half and that cost them," said Coach Pat Cunningham.

The Mats' play of the day was also their first score as AWC tailback Damien Williams broke three tackles at the line of scrimmage, changed direction and blasted up the sideline for a 53-yard touchdown run with just 5:49 left in the half. AWC finally got rid of the goose egg that had plagued them for more than 24 minutes and giving them a glimmer of hope at 7-27.

Things looked pretty bleak for the Mats at half time with a 13-34 score. But, true to the Matador spirit, these guys came back with a vengeance. The second half was an extravaganza of determination. Although there were still a lot of missed passes, tripping over their own feet and an accumulation of 16 penalties for 150 yards, the score gradually continued to rise for the Mats.

After Williams rocketed through a 60-yard touchdown run, making the score 27-41, things got a lot more interesting. This was the closest they had been since the first quarter, momentum was at its peak and the crowd was on the edge of their seats.

The Mats gave it everything they had up until the last 11 seconds, when a fourth-and-14 attempt went incomplete. But, the Lions were just as determined and, in the end the 47-55 loss was respectfully accepted.

EMCC was the same team the Matadors lost to two years ago in a bowl game on Mississippi home ground. As the saying goes, the third time will be the charm.