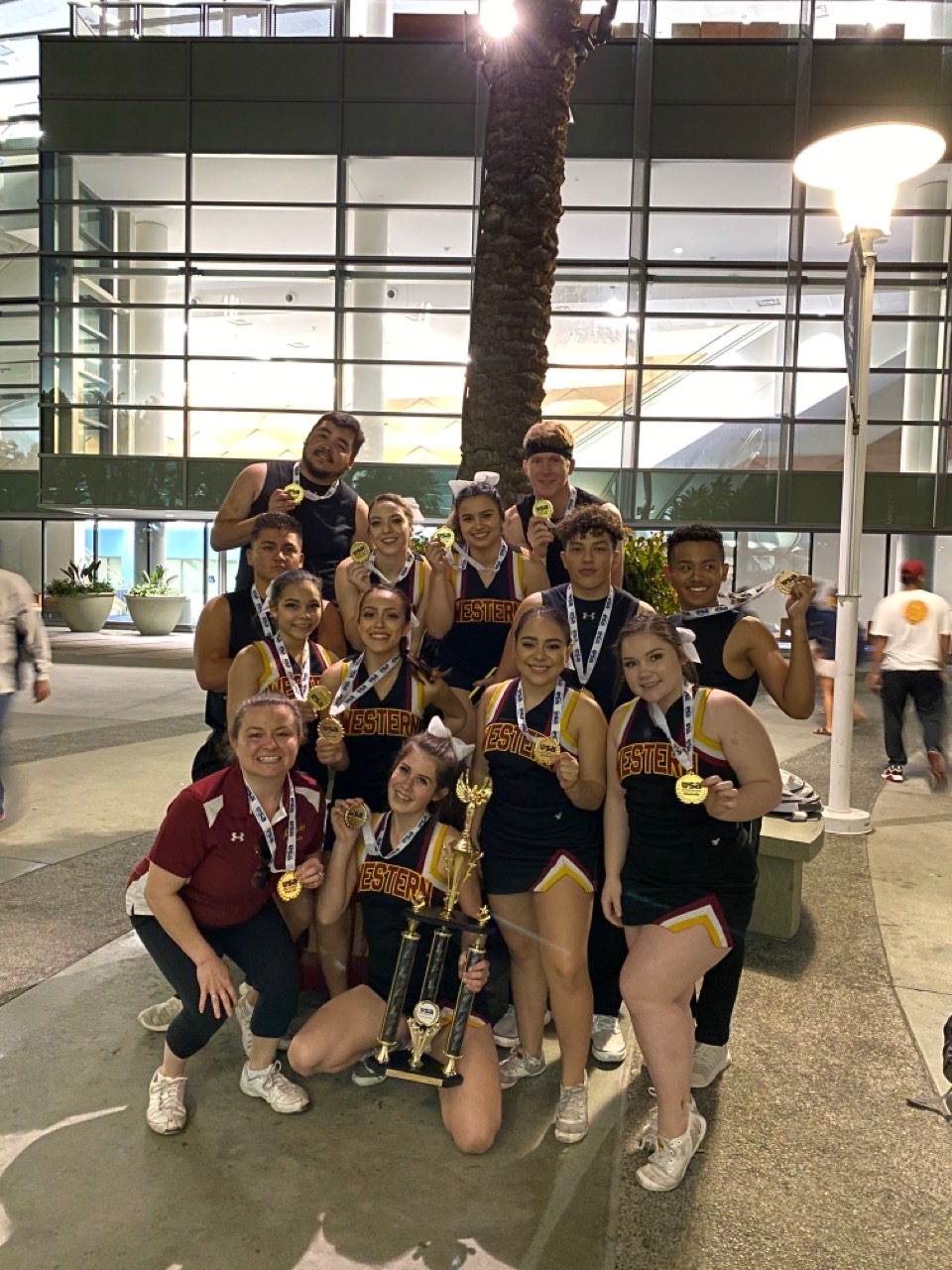 Preparing for a big competition such as the collegiate championships, a team has to practice lot. It can be challenging to get all team members to practice together especially as full-time college students balancing classes and jobs.

Amanda Nakasawa, 28, AWC’s new head coach this season, did her best to have the Matadors prepared for the championships.

“With no football season, we took advantage of starting our competition routine early and have been practicing very hard,” said Nakasawa.

With the Matadors placing 3rd, Nakasawa and the team were proud of taking home the bronze.

“This team worked very hard, and as a first-year head coach I wanted to make sure that I did my best to have this team prepared for competition,” said Nakasawa. “They made me very proud.”

Kameli Gay, 19, has been cheering for 5 years and has been with the Matadors for 2 years. Gay often gets nervous before a competition.

“I have really bad performance anxiety, so the days, hours and seconds leading up to competition I have a hard time eating, sleeping and have lots of panic attacks” Gay says. “It’s more stressful than people realize, having to perform in front of a thousand strangers.”

On the second day of competition Gay was determined to perfect the routine. She searches for methods for staying calm and ways to overcome her performance anxiety.

A challenge the team faced was getting everyone to attend the practices.

“We had a lot of dilemmas before competition when it came to stunting,” said Gay. “Before we learned our competition routine, a flyer of ours had quit the team.”

With recruiting a new flyer who had no experience, the Matadors taught the newcomer a difficult stunt routine in preparation for the competition.

“I learned that when teaching newcomers being patient and listening to their fears can help you help them in accomplishing the scariest stunts,” said Gay. “It can be stressful, not just for the people attempting the new stunts but for everyone on the team, because at the end of the day it’s a team effort and not just based off of individual talent.”

Jesus Gonzalez Leon, 19, who has been on the AWC cheer team for two years, opened up about the biggest challenge for this season leading up to the competition.

“I got to bond with my team and learn through different exercises and events that we did,” said Gonzalez. “The biggest challenge and fear I had during the competition was doing the pyramid. Having everyone show up to the practices and practice the stunts is the key to getting better and overcoming that fear.”

Both Gay and Gonzalez learned a lot from this season, not only from their personal experiences but as a team.

The Matadors teach and encourage each other to overcome their fears and the impossible when it comes to doing stunts. They plan to take their experience from this year’s competition to improve themselves for next season and aim for the gold.

What have you been doing to pass the time at home?
Watching Netflix (or other movies)
29%
Playing Animal Crossing (or other games)
20%
Cooking/Baking
7%
Reading/Writing
13%
Gardening
30%
Total votes: 99