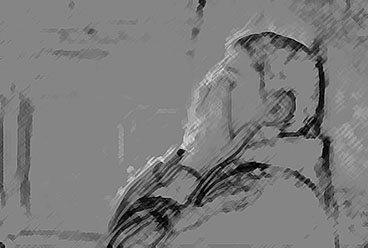 Mental Illness. It's very real and often terrifying for those who have it. I was able to speak with a fellow student, "Jeff," who told me his story. We sat among the sea of books in a little corner of the Academic Library at Arizona Western College.

"This is my spot," he said leaning back.

Jeff's exterior is one of humor, sarcasm and all-around fun.

Perhaps that is because Jeff knows what its like to live in an inner darkness. But beneath that humorous exterior lies a darker, more venerable side.

"I tried to kill myself on multiple occasions," he said.

When I asked what brought him to the point where he felt his life was not worth living, he answered by telling the ancient story of Pandora's Box. In that story, a box is given to Pandora by the gods with a warning not to open it. As her curiosity grows, she decides to open the box, unleashing all things terrible in the world, along with one good thing -- hope.

"What do you do when you open the box and hope is not there?" asked Jeff.

He went on to tell me about the day that changed everything for him.

"By now I had lost all motivation to live," he said. "All my energy, enthusiasm, and hope were gone."

Jeff went into detail about how his most recent attempt to take his own life landed him in a Tucson mental-health facility.

"I went willingly just to show that I tried to get help," he said. "That way if I ever tried again and succeeded people, would know that I did what I could."

While at the facility, Jeff was diagnosed with Borderline Personality Disorder (BPD) and has since been undergoing treatment.

"Right now, I feel really hopeful," he said. "There are bad days, but I just need to accept them as apart of life."

Jeff is not cured, by any definition of the word; but he is getting better now that he knows how to handle his illness. He wants to raise awareness about other young people who may be suffering in silence with undiagnosed mental illnesses that are causing them to spiral down the path toward suicide.

Jeff has some advice for his fellow students: "If you are having these thoughts please seek help. It's scary at first, but it is worth it."
If you or someone you know is struggling, please call 800-273-8255, or visit www.suicidepreventionlifeline.org.