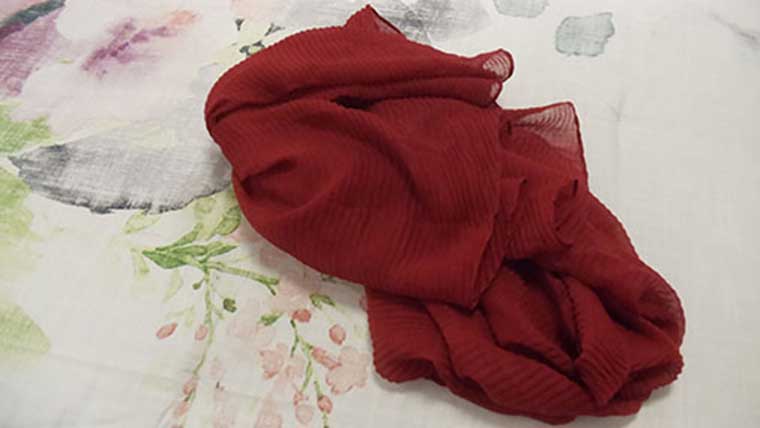 On my drive to school that Wednesday morning, my mind was on one thing, that red blouse. That stupid red blouse that was keeping my neon pink socks hostage and made me eight minutes late for class. What was it doing in my sock drawer anyway? I haven’t worn that thing in years. I almost threw it away out of frustration, but something stopped me. Instead of throwing it in the trash, I jammed it back into the sock drawer where it came from. I couldn’t figure out why. The question was tormenting me. I had kept it for so long for such a meaningless reason, why couldn’t I get rid of it now that it was giving me problems?

The blouse was a dark shade of red, like fine aged wine. It was the type of red you use to describe love, deep and poetic. The blouse was a weird combination of a deep V-neck shirt and a tank top. It was loosely fitted, sewed with a clean white shirt underneath to keep me from revealing too much – the perfect match to the white knee high shorts I bought with it. The shorts were designed with thin consecutive lines of red and brown. Ugly I know, but as a nine-year-old girl, I put little thought into what I wore.

That red polyester shirt with those ugly white shorts was the outfit I wore when I got my very first puppy, something I otherwise would have forgotten had he not passed away a year later. It was my first experience with death and, as overdramatic as it may seem, my perfect little world was shattered. I was introduced to the world of grieving, and felt it was my duty to pay tribute to my deceased companion.

So I kept the outfit. Eight years later, there it was, still in my possession. From closet to hanger to sock drawer, I didn't get rid of it. But why had I kept it for so many years? At this moment, there was no more sentimental value left in it. It was nothing but an old shirt and old pair of shorts I will never fit into. But I couldn’t throw it away.

That same day when I got home, I went straight to my drawer to retrieve this once-hidden treasure. I stared at it. I wasn’t searching for an answer, but I found one anyway. That annoying red blouse was one of the many items that I have collected because of the story they remind me of. And, although I am not the first to keep something out of sentimental value, I think it’s more than just that. In a way I think I am afraid of forgetting. I’m afraid of getting rid of things or people because, if I do, I will leave behind the memory that came with it.

So I kept it. Only this time I wasn’t honoring a dead dog; I was honoring myself.