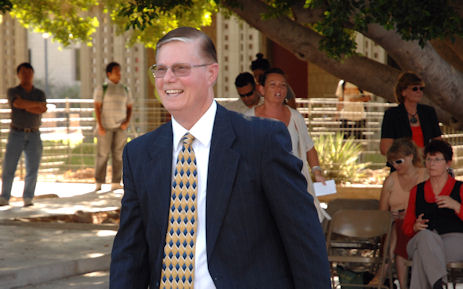 In September it was announced that Arizona Western College's acting President Dr. Glenn Mayle accepted a three-year contract from the district governing board for the college's presidency, bringing some stability to the campus. Many of us who are fairly new to the campus don't really know much about Dr. Mayle, though.

The district governing board expresses much confidence in the new president and rightly so. From 1977-1984, Dr. Mayle was Dean of Instruction at AWC. During that time he is credited with implementing the four day schedule of classes at AWC to enable students to spend the same number of hours in each class with longer class periods. The four-day schedule was pilot tested for two summers and is now year round.

He also instituted a degree program in the satellite center of Parker where many graduates never attended classes on the main campus. "He would fill the car with textbooks, drive to Parker, enroll students and helped successfully launch that learning center," his secretary Laurel Adair stated in an email.

Dr. Mayle was born and raised in Yuma and spent many years working in agriculture. His roots began at AWC "from the ground up" having worked as a laborer on many of the buildings that are located on the Yuma main campus. He went for a college visit to NAU in Flagstaff on a whim with a friend, not intending to return as a student. His sister, Pearl Garcia, helped him enroll in classes and started him on the educational track. He graduated with a Bachelor of Science Degree from ASU and a Master of Arts Degree from NAU. He earned his Doctorate from NAU also, majoring in Educational Administration with an emphasis on community college. His dissertation title: A financial model for uniform reporting of expenditures in Arizona Public Community Colleges.

He has 26 years of experience as a community college president at Northeastern Oklahoma A & M College, Gavilan College and Treasure Valley Community College.

Some of you may see him out in the community since he has his hands in so many projects. He is involved with the County Compensation Board, Chamber of Commerce, Yuma Private Industry Council, Past Rotary President, Boy Scouts of America Council Member, Sidewinder Swim Club past president, Church, Service Clubs, and Sister city Delegate -- Sayama, Japan.

Considering all this, we can be confident good things will come to AWC in the next three years.