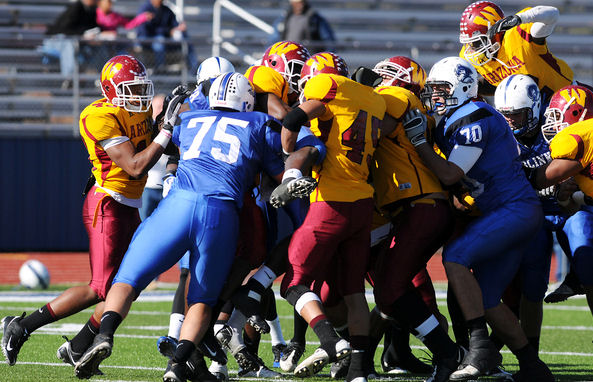 The 4th ranked Matadors were chosen for the C.H.A.M.P.S. Texas Bowl at Bulldawg Stadium in Copperas Cove, Texas on Saturday, December 4, 2010 after winning their second straight Western States Football League title. This achievement provided their first back-to-back postseason appearances since 1980 & 1981.

The Matadors entered the game with an eight-game winning streak, but were not able to gain on the 16th ranked Buccaneers of Blinn College, the defending national champions.

Blinn opened the game with a drive down the Matador's 17 yard line, but came away empty when Chase Hover's field goal attempt sailed wide left. AWC didn't score on its first possession either, so Blinn was able to take control.

Blinn scored the first 17 points of the game before AWC cut the lead to 17-14 at the half.

Coach Tom Minnick said, "They had the ball a few more possessions than we did in the first quarter, and that hurt us. Once we got rolling in the 2nd quarter, we began to catch up, but we couldn't make up those first few possessions by halftime. "

In a kickoff attempt, Blinn returner Isaiah Battle lost control of the football, with AWC's Nathan Mayfield coming out of the mashup with the ball. But the refs ruled Battle was down and Blinn regained possession.

Coach Minnick felt it was a fumble and Lopati had tipped the ball on a roughing the punter call. Minnick said the Battle fumble reminded him of a call earlier in the game when AWC kick returner Brock Ringo lost control of the ball as he hit the ground in the second quarter. Referees ruled it a fumble and Blinn scored on the extra possession to take a 17-0 lead.

Either way, they would go to the home team. It was just two of several plays that put the Matadors at a disadvantage throughout the game and left them feeling cheated.

Coach Minnick said, "In the second half, along with some of the questionable calls that went against us, we had our chances, but we dropped a couple of balls, and didn't make the plays we should've made. We'll see if those calls were legitimate when we look at the film, but some of those really hurt us in the last quarter of the game."

Fans were not left totally disappointed as they witnessed Reggie Bullock's, 2009-2010 ACCAC Player of the Year, 100 yard run for the 15th straight game. He was named AWC Bowl's Most Valuable Player.

Also, the 2010 Matadors tied the 1972 Matador National Championship team for most wins in a single season in AWC ës program history. We are still proud of the team for all their hard work and a great season.

Here are the final polls: