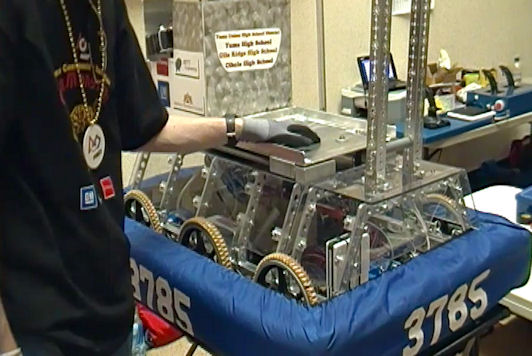 Twelve Yuma high school students participated as the Gila Monsters for the blue alliance team in the 8th Annual FIRST Arizona Regional Robotic competition in Chandler March 18 and 19th. Their robot won them the Quality Award which is given to the team with the highest-quality robot. They were also awarded as the second-best rookie team at the competition out of six new teams.

The students from Cibola, Gila Ridge and Yuma High Schools designed and built a robot they called "the convict" with the help of five mentors from General Motors and one mentor from Arizona Western College. The Gila Monsters stayed in the game all the way to the quarter final taking 15th place out of 45 entries with a ëdefensive' robot.

The game is called LOGO MOTION and is played by two alliances; red and blue. Competing on a 27' x54' field, the match basically consists of hanging Logo pieces (inflated plastic tubes in shapes of triangles, circles and squares) onto the grid in their end zones. There are three levels and each level rated ascending scores. If they hang them over an Ubertube they gain double points. As an added bonus each match ended with robots deploying minibots onto vertical poles. The minibots climbed the poles to trigger sensors. Each alliance has three bots per match and had to win at least 2 out of 3 matches to stay in the game.

The Gila Monsters began the finals in the 15th place. In the quarter finals against the red alliance, however, they and their teammates lost their third match, 38/59 and they were out of the game.

The blue alliance in the final match consisted of Tempe's Marcos de Niza, Paradise Valley and Kingman. But, the red alliance from Tolleson AZ, Hermosa Beach CA and Phoenix Union took the field when the Kingman robot lost power and stopped shortly after the match started leaving them without any defense. This resulted in a final score of 5/112. Although Kingman had called for a 6-minute time out just prior to the final match to make some repairs, the robot still lost power.

All the teams enjoyed this intense, energetic and fun-filled event. From the opening ceremony to the final match, there was never a dull moment in the long pep rally atmosphere. Even between the matches classic rock blasted the air, mascots roamed through the audience, the audience danced in the aisles and on the bleachers, and the entertainment and announcements from the center field kept the place charged to the max. Even the pits were exciting with friendly competition around the score boards and in the food court.

The FIRST experience was also fantastic for the Yuma rookies as they were given a tour of the science labs at ASU the day before the event.

This is one event you will want to schedule as our Gila Monsters come back with a lot of fresh ideas and experience to send them into the lead at next year's competition. Red alliance be warned!!!