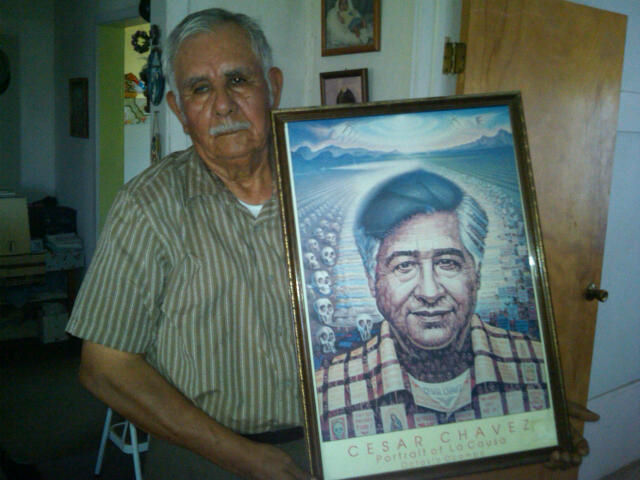 Sandez NuÒez, 78, is an active member of the United Farm Workers (UFW). He lives in San Luis, Arizona and volunteers at The Cesar Chavez Community Center.

"(Cesar Estrada) Chavez was always concerned with the well being of all the members who were actively participating on the next move," he said. "He made sure everyone had a meal before the long hours of session, during the three days we were (at the Fresno convention in 1973) planning our next march."

"With Cesar Chavez, I learned to defend our rights as a person and as a worker, not only as a farm worker," he said. "But, I think we all have to be treated with respect and dignity. Thanks to Cesar many farm workers today have access to water, clean bathrooms and better working conditions," NuÒez added. "But, the fight must continue."

Cesar Estrada Chavez was many things to many people. He was a Latino and a farm worker. He was a leader of labor and civil rights. He was a religious and spiritual figure, a community servant and social entrepreneur, a crusader for nonviolent social change, an environmentalist and a consumer advocate.

A second-generation American, Chavez was born in Yuma, Ariz., on March 31, 1927. Chavez grew up in a small adobe home, on a ranch in the Gila River Valley. When the ranch was swindled from his family by a broken agreement during the Great Depression, he learned a lesson about injustice that he would never forget.

In 1938, Chavez and his family moved to California, where they worked in the fields amidst harsh and racial circumstances.

A dislike for schools

Chavez attended 37 schools because his family was constantly moving to different cities to work in the fields. Chavez felt that education had nothing to do with his farm worker/migrant way of life, but in 1942 he graduated from the eighth grade. Although Chavez's childhood school experience was not the best, later in life he learned that education was his passion.

Chavez joined the Navy in 1944, at the age of seventeen. He served two years he experienced strict regimentation and more discrimination. He has been quoted as saying those were the worst two years of his life.

In 1962, Chavez, with Dolores Huerta, co-founded the National Farm Workers Association, later to become the United Farm Workers. That same year Richard Chavez designed the UFW Eagle, and Chavez chose the black and red colors. "A symbol is an important thing," Chavez said. "That is why we chose an Aztec eagleÖ. When people see it they know it means dignity." It was the beginning of "La Causa," a cause supported by organized labor, religious groups, minorities and students. Chavez had the caution to train his union workers and then to send many of them into the cities where they were to use the boycott and picket as their weapons.

"It is my deepest belief that only by giving our lives do we find life." Chavez once said, living that principal until his end.

According to Wikipedia, the UFW, during Chavez's tenure, was also committed to restricting immigration. Chavez and members of the UFW marched from the Imperial and Coachella Valley's to the border of Mexico in an effort to protest growers' use of undocumented immigrants as strikebreakers. In its early years, Chavez and the UFW reported undocumented immigrants who served as strikebreaking replacement workers, as well as those who refused to unionize, to the Immigration and Naturalization Service. He did this not only to protect the illegal immigrants from the harsh demands of the growers, but to protect the rights of the striking farm workers.

Chavez and the UFW had been in a legal battle with Bruce Church Inc., a giant in Salinas, California-based lettuce and vegetable producer, since 1979 when the UFW began a nationwide boycott campaign against the company.

In 1993, Chavez was in San Luis, Arizona, helping UFW attorneys defend the union against yet another lawsuit from Bruce Church, Inc. After the trial recessed at about 3 p.m. on Thursday, April 22, 1993, he spent part of the afternoon driving around Yuma and looking at the old places that he knew as a child.

Chavez died peacefully in his sleep the next morning. His body was taken to La Paz, the UFW's California headquarters, by his family and UFW leadership.

"Cesar gave his last ounce of strength defending the farm workers in this case," stated his successor, UFW President Arturo Rodriguez, who was with him during the trial. Luckily, Chavez did not live to see the 31-day trial ending with the jury returning a general verdict in favor of Bruce Church, awarding compensatory damages of $4,911,833 and punitive damages of $491,183.

Despite that setback, Chavez remains an idol for those who believe that persistence, hard work, faith and willingness to sacrifice would maintain self-respect for the adherents. He lived to prove that the union could secure the spirit of all people if it was rededicated to the struggle for justice through nonviolence.

Chavez left our world better than he found it and his words, "Si Se Puede" (If you can), will endure for every civil rights activist who contributes to the economy of this country.