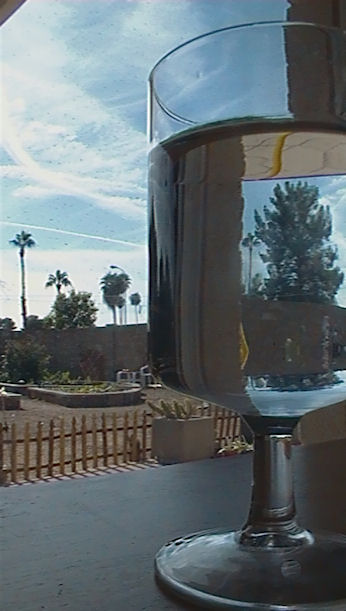 Water -- two atoms of hydrogen joined to one of oxygen. A precarious 0.03 percent of the global resources of this chemical compound sustains the survival of almost seven billion people.
Our planet Earth is a closed system and the amount of moisture has not changed. The water that dinosaurs drank million of years ago is the same that falls as rain and that we used in today's shower. But will there be enough for a more crowded world?

How we use and reuse water will define the future of this planet and the future of our children. A population of seven billion is manageable; the problem arises when this number is multiplied by the way we intend to live our lives. When it comes to using water, less is more.

Each of us needs to become a solution for this creeping predicament by committing ourselves to help ensuring an abundance of clean water for future generations. We need to think globally and act locally to be the change that we want to see around us.

Where do we begin? Well, knowing the difference between bottled and tap water is a good starting point.

Fact: Bottled water is not a good value. For example, a $1 vending-machine price for a 20-ounce bottle works out to 5cents an ounce. In Yuma, municipal water costs much less than 1cents per gallon. Thus, to get the recommended eight glasses of water a day, the average Yuman would spend $1,400 a year on bottled water but only 49cents on the same amount of tap water. In another comparison, at an average current price of $3.50 per gallon, gasoline costs a bit more than 2cents an ounce! In terms of price-versus-production costs, bottled water is a big winner for the bottled-water industry.

Fact: Bottled water is no healthier than tap water. Using aggressive advertising, the bottled-water industry is trying to convince the public that water purchased in bottles is a healthier alternative to tap water. Bottled water in the U.S. falls under the regulatory authority of the Food and Drug Administration (FDA), so it is a "food item." However, about 70 percent of all bottled water in Arizona never crosses state lines for sale, making it exempt from FDA oversight.

In contrast, local municipal water systems are well-regulated. In the U.S., municipal water falls under the jurisdiction of the Environmental Protection Agency (EPA) and is routinely inspected for bacteria and toxic chemicals. U.S. water utilities monitor drinking water for more than 100 contaminants.

Yuma's drinking water provider must meet close to ninety regulations for water safety and quality. The City of Yuma's water supply meets or exceeds all federal and state water-quality standards. Under the requirements of the EPA and the Arizona Department of Environmental Quality (ADEQ), the City of Yuma monitors and tests drinking water from source to tap. Every year, Yuma water utilities provide customers with a detailed quality report. Such reports can be obtained everywhere by contacting the local utility, or by visiting www.drinktap.org or www.epa.gov/safewater/dwinfo/index.html.

In addition, many U.S. drinking-water systems add small amounts of fluoride to their water to help prevent tooth decay. Nationally, child cavity rates have been reduced from 20 to 40 percent in areas where drinking water is fluoridated. Epidemiological studies have consistently showed that bottled water is no purer than tap water, yet costs about 1,900 percent more. Ironically, approximately 40 percent of bottled water is nothing but local tap water!

Fact: Bottled water means garbage for the environment. Bottled water produces up to 1.5 million tons of plastic waste per year. That plastic requires up to 47 million gallons of oil per year to produce. Surprisingly, the plastic used to bottle beverages is of high quality and in demand by recyclers; however, more than 80 percent of plastic bottles are simply thrown away and not returned to recyclers. Plastic waste is now at such a volume that vast eddies of current-bound plastic trash now spin endlessly in the world's major oceans, representing a great risk to marine life and killing birds and fish which mistake our garbage for food.

Bottling and transporting water within the U.S. uses 912 million gallons annually. The Earth's fossil-fuel supply is rapidly being depleted. By slowing consumption of bottled water, we can alleviate global concerns about running out of fossil fuels and about their harmful byproducts, which are emitted to the atmosphere.

Another troubling environmental effect of bottling water is the destruction of ecosystems due to overdrawing surface water reservoirs and aquifers. Because of their slow decay rate, the vast majority of un-recycled plastics still exist -- somewhere!

Fact: Sustaining a household on bottled water means less awareness of and less attention to public water systems and neighborhood issues. Many people drink bottled water because they don't like the taste of their local tap water, or because they question its safety. Distanced from public systems, bottled water consumers have little incentive to support bond issues and other methods of upgrading municipal water treatment and distribution system.

Our water bill pays for a lot more than simply water; it includes sophisticated water treatment, testing and monitoring, and an underground drinking water distribution system. And our water utility provides more than just water; it provides fire protection, public health safety, community and social values and peace of mind.

Fact: The corporatization of water is slowly progressing and, along with it, global environmental injustice. Water is the "Blue Gold" of the 21st Century. Because increasing urbanization, population growth and industrial pollution are causing a shift in climates, freshwater is becoming humanity's most precious resource. So-called "free goods" such as fresh air and clean water are of more real worth than most economic goods.

Multinational corporations are stepping in to purchase underground water and distribution rights wherever they can. The bottled-water industry is an important component in their drive to commoditize what is a basic human right -- access to safe and affordable water. It is our right; we need to keep, preserve and treasure it! Some bottling companies already have privatized entire countries. When this happens, they have a monopoly over the price of water and often set it too high for people to afford.

Question: Why is bottled water so popular in the U.S., where public tap water is clean, safe and affordable? Even with an increasing awareness of serious environmental issues, people are slow to change their habits. It is not surprising. Bottled water is advertised as a part of a healthy lifestyle, success, fame, beauty and intelligence -- so who wouldn't pursue these goals? People use bottled water for various reasons -- for its convenient transportation, its guaranteed purity, its preferred taste, and, often subconsciously, as a status symbol.

Many of these justifications are just not valid. A status symbol? Yes, if we pay attention to the excessively expensive bottled-water brand that people in Hollywood drink to stand out as truly glamorous and wealthy. Why is it that, despite comprehensive evidence of the negative effects of bottled water, tap-water campaigns are close to not existing? It's simple: When we buy bottled water, our money sponsors the advertising; when we use tap water, we just pay for the water.

Conclusion: We all can and must make a difference in each of these areas -- with our buying power! After all, this is our water: we need to be smart about it and use it wisely!