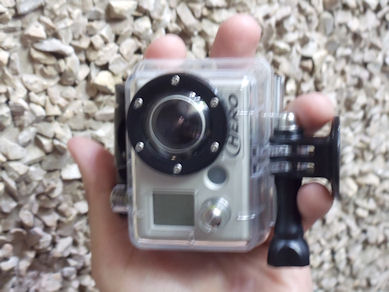 How would you capture the thrill of riding a long-board on video? When my friends and I asked ourselves that question, we did some research and came across the GoPro Camera.

My friends and I watched countless videos shot with a GoPro until we were convinced that this is the camera we need. The price ranges from about $150 to $300 -- fairly inexpensive considering that it can capture video in high-def 480p, 720p, 960p and 1080p. Incredibly, the camera dimensions are 1.6 x 1.2 x 2.4 inches, and it weighs about 5 ounces.

The GoPro also comes with various mounts that can be put in places where regular cameras could never be mounted or simply are not small enough to fit into. Everything from suction cup mounts to chest mounts are available for the camera.

It is built to capture fast movements and therefore needs to be small enough to be mounted almost anywhere. Wearing the camera on either the head or the chest is guaranteed to capture the ecstasy of riding a skateboard, riding a motorcycle, or skydiving.

The GoPro comes with a waterproof case that protects the camera so it can be used when surfing or when swimming up to 200 feet under water.

This camera might sound like a miracle, but it does have drawbacks. First of all, it doesn't have a viewfinder for helping to frame the shot. Also, the inability to zoom in or out cripples the shot or scene when it comes to getting near the action. It is obviously not built for aesthetics but rather for durability, quality and versatility.

Overall, it's a great camera for shooting extreme sports and getting where no other consumer camera has been before. For the price, it's a great deal because of the quality of the video. The GoPro Company sells many accessories for the camera, so the small size doesn't need to be a handicap.

Its creators describe the GoPro as the "world's most versatile camera," and it lives up to that claim.