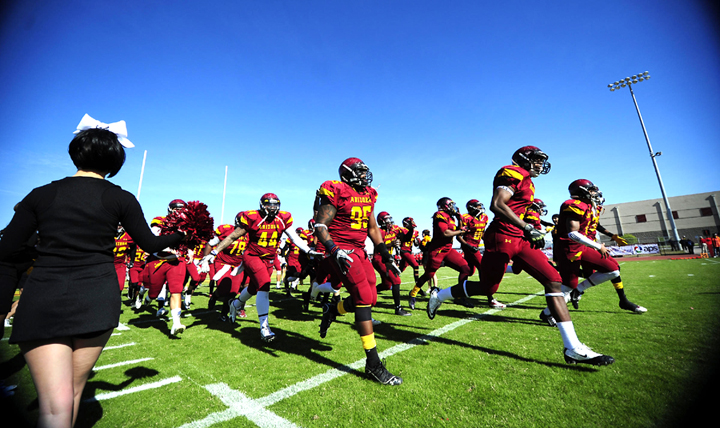 Fall '14 football - through the eyes of a new recruit

After a loss in El Toro Bowl last season, the AWC Football team looks primed to resurge as contenders for next season. They're already thinking about going all the way -- not just making an appearance at El Toro Bowl, but winning, no matter the rival.

After their 32-16 loss to New Mexico Military Institute this past season, the Matadors are ready to erase that memory and are hungry to pick up where they left off last season.

"Look out for our whole team, because we're coming in," says newly recruited fullback Prince Radcliff II. "I say we're going to be like the old-school U [University of Miami] -- just straight dominance."

Since the end of the past season, the Matadors have suffered some losses on their roster due to players transferring from Ju-Co level to D-1 and D-2 NCAA Football programs. Some of those players include quarterback Tyler Rogers, defensive tackle Anthony Olobia, offensive lineman Akoakoa Paleka-Kennedy, wide receiver Cody Hillister, and Hillister's twin brother, tight end Evan Hillister.

Those could mean significant losses for the Matadors, but Prince had an answer for that.

"He (Coach Minnick) already knew who was leaving, and ever since then he's been on the phone getting some of the top players in the nation to fill that spot," he said. "I feel that, when the season comes, we're going be right where we left off or probably even stronger with some of the recruits that Coach has brought in."

The place to be

Ronald Prince James Radcliffe II, known as Prince, was born in Japan but grew up in Milwaukee, Wis. He attended Riverside University HS and played there as an offensive guard and fullback. He was in the military for several years and so was never recruited by a Division 1 program.

After his military service, Radcliff was recruited by Iowa Central College but decided to transfer to AWC since the program in Iowa didn't meet his expectations.

"They were just terrible. I don't mean to bash anyone," he said, "butÖif I have the coaches saying that we're going to lose this game, that's a place where I don't want to be."

After talking with some of his former school rivals from Milwaukee, Radcliff realized that AWC has a top football program and was convinced that this was where he needed to be. He also did his research and found that AWC was one of the top programs in his career field, culinary arts, and will thus provide the opportunity for him to open his own restaurant once he completes his education.

Radcliff is one of the many recruits who have recently arrived during this spring semester and have started the conditioning program in order to be ready by the time practice begins. So it still seems that the team is poised to have another winning season, even after all the losses at some key positions.

"We're hungry for it every day," Radcliff says.

When discussing the Bowl loss, he adds, "It doesn't matter what we're doing, we could be in math class, we could be at a barbecue, we could just be sitting here playing video games, that is going to come up at least three or four times while we're hanging out.

"That's why we get up at 5:15 every morning to go lift weights. That's why every Tuesday and Thursday we go out to the field and run to the hills -- because we're hungry. Because if we know that if we're doing it, we're pretty sure Georgia Military School, they're doing it, too. So we can't have them outwork us."

As we look to the beginning of off-season practices at the end of March, our Matadors are hungry. We'll see how far that takes them next season.