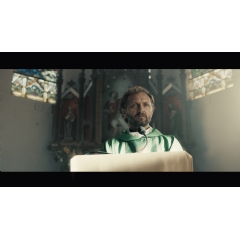 The following are the Fall 2013 films along with a synopsis of each:

"Magnetic! It's a film to be admired." -- Jonathan Romney, Screen Daily

Synopsis: Adam is a Catholic priest who discovered his calling as a servant of God at the relatively late age of 21. He now lives in a village in rural Poland where he works with teenagers with behavioral problems who fight and yell abuse. He declines the advances of a young blonde named Ewa, saying he is already spoken for. However, celibacy is not the only reason for his rejection. Adam knows that he desires men and that his embrace of the priesthood has been a flight from his own sexuality. When he meets Lukasz, the strange and taciturn son of a simple rural family, Adam's self-imposed abstinence becomes a heavy burden. Berlin 2012 Teddy Award Winner!

Synopsis Arman is 33 and ready to make a change, starting with a run in the park. When he literally bumps into AmÈlie - slightly cynical but nevertheless lovely - on the jogging path, he's dead-set on making a connection with her. As a bit of contrived fate brings them together, Arman's best friend Benjamin suffers an unexpected stroke, relegating him to the hospital for weeks where he falls for his doting young physical therapist. Over the course of two autumns and three winters, Arman, AmÈlie and Benjamin share the incidental moments, unexpected accidents, unconventional love stories and unforgettable memories that will define who they are.

Synopsis: In this madcap and lighthearted comedic romp, introverted optometrist Weichung begins to question his marriage with his wife Feng, upon learning of her desire to have another baby. At his sister's engagement party, Weichung bumps into an old friend, Stephen, a wedding photographer who, though also married, is living the high life of a younger, single gay man. When Stephen teases Weichung for his newly straightlaced lifestyle, dormant emotions are awakened in Weichung, setting him off on a quest for true romance and desire.

Synopsis: A man of few words, Gaby manages his family's farm - Buchard & Sons - on his own, despite his advancing age. With no actual sons to speak of and his two grown daughters living far away in the big city, he spends his days tending to the animals and land that surround him, eschewing modern technology and most social interactions. When his eldest daughter, Marie, appears at the family homestead to share news that she's finally getting divorced and in desperate need of money in order to keep the home where she and her children live, Gaby's quiet life begins to unravel. In an effort to tend to his children much the way he steadfastly tends to his farm, he'll be forced to make sacrifices he never intended for the sake of those closest to him.