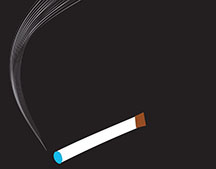 But wait, why electronic cigarettes? Despite having the word "cigarette" in it, e-cigs are a far cry from the conventional tobacco products. In my opinion, e-cigs should not be banned on campus.

To begin with, many people are automatically turned away from e-cigs because they are uninformed on what exactly they are. A simple Google search could basically solve all of this, but since so many people are reluctant to even do that, I feel like I can try and shine some light on what they are and how they work. Imply put, e-cigs boil down to three main components -- the battery, the atomizer and the device itself. Mix in some e-liquid, and you've got yourself an electronic cigarette.

Most believe that e-cigs are just as dangerous as cigarettes, but that is not the case. Cigarettes have toxins and carcinogens that are bad for the body, as well as for other people around smokers due to second-hand smoke. The e-liquid that is inhaled with an electronic cigarette has none of this. It has four, sometimes 3 main ingredients -- propylene glycol, vegetable glycerin, flavor additive and sometimes nicotine. That's right, not all e-liquids even have nicotine.

While I do agree with banning tobacco products from campus, I feel the ban on e-cigs should be reconsidered. There is absolutely no tobacco involved with them, and they help many people, including myself, stay off of actual tobacco products. In my case, my e-cig has kept me away from smoking cigarettes and or a hookah, which I used to do on a daily basis. I used to have trouble running even a mile, but since I kicked smoking in favor of "vaping" it has become much easier for me to work out.

E-cigs do not ruin lives, they're a much safer alternative to cigarettes, and not allowing some students to use them is unfair -- especially if they're here all day like I was last semester. Some people need that daily nicotine fix to get them by, and not being able to get it on campus is a problem that would not exist if the ban on e-cigs were lifted.