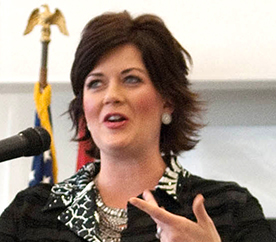 Can fruits and vegetables be exciting? According to the attendees at this year's Ag Summit Luncheon, held in the Schoening Conference Center at Arizona Western College, the answer is a resounding "yes," especially when it comes to a very special speaker and industry celeb, The Produce Mom.

Lori Taylor is the genius behind the innovative Internet blog, theproducemom.com, which she began in her spare time while working as a marketing manager at the Indianapolis Fruit Company. In it, she helps consumers to select stores, learn more about all the different produce available and try out delicious and innovative recipes -- all in a casual tone that anyone can relate to.

In her speech she chronicled her journey, which would push the industry and the company forward, bring her to prominence as an agricultural celebrity and industry leader, and even get her named to the list of "40 Under 40" to watch for in Business Produce Magazine.

Taylor's story resonates with ordinary people who can relate to feeling like a "cog in the machine." She started out working for Indianapolis Fruit Company as an inside sales rep, taking phone orders, monitoring delivery trucks, servicing big cities as well as rural areas, delis, college juice bars and just about every possible demographic and location. But she wasn't feeling challenged. She wanted to move forward in her career.

As luck would have it, she was called in for interviews to help translate from Spanish to English surveys that workers would be filling. She explained to the attendees how difficult these laborers' jobs were, just watching them standing for long hours sorting vegetables.

The question on the survey was, "Why do you think your job is important?" Most of the laborers had the same answers: They didn't really know. They didn't feel important. It was tough, but they needed to do it to keep food on the table. The comment by one laborer, Maria, that "I bring food to people's celebrations" resonated with Taylor, and she has carried that attitude with her ever since.

With time, Taylor became increasingly dissatisfied with her position at the company. She didn't get to spend enough time with her newborn baby, and she ended up becoming the worst-performing sales rep.

But another door opened for her when the marketing manager quit and Taylor felt confident that she could take on the position. However, she had no experience in management nor any educational background in business, and she had become more focused on her family than her career.

Not surprisingly, the boss turned her down. Angered, she had the nerve to ask him, "Well, what makes you so qualified?" To her astonishment, he was impressed by her assertiveness and gave her the job.

Later, she realized that the marketing position felt useless, and she ended up falling into another sad and desperate state, struggling to find joy and purpose. She would stay up all night worrying about getting let go and being unable to provide for her family.

Voice of the industry

At this point in the speech, Taylor became emotional and teary-eyed, apologizing to the audience for losing her composure, but she went on to describe how she decided to start a blog on a Thursday night in December of 2011.

She was looking through industry blogs and noticed they were stale and read more like Wikipedia entries. They also seemed to be written for specialized audiences -- farmers, dietitians and health nuts.

She felt the industry was lacking an all-encompassing voice, so she decided to become that voice. She wondered how she was going to sell this idea to her bosses, and one day, she was called into a meeting. She just knew they were going to let her go, especially since the owners of the company were present that day and wanted to talk with her personally.

"Yes, I have an idea, and it's a really big idea. I think we should start a blog -- I could author it, and we could call it The Produce Mom."

The owners reluctantly decided to give it a try and gave her the resources to get started. To everyone's surprise, the blog has become successful as it educates consumers about fresh produce. Eventually many companies wanted in on the action, and they are now featured on her blog, including Kroger, Yonanas, Earthbound Farms, Tanimura and Antle.

Her blog has even branched out into a popular children's section called "Find your Favorite," featuring spokespersons such as university football star Coby Fleener and NASCAR driver Kasey Kahne.

Passion for her work

Taylor's life changed unexpectedly through a combination of luck, circumstance and opportunity, but she feels blessed everyday and strongly believes in what she does. She has a passion for it, as is evident in her emotion-filled speech. For her, it is a true honor for her to work in agriculture, and she feels that farmers work harder than anybody she knows.

Business Produce Magazine asked her what company owners can do for their employees to be more successful. "I would like for businesses to do what Indianapolis Fruit Company has done for me -- give chances," she said. "Your story must be heard."

After the speech, Taylor was given a standing ovation as well as a banner adorned with signatures of the attendees, thanking her for her inspiration.