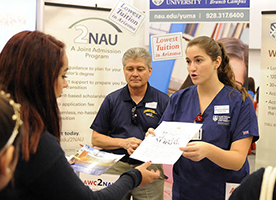 Starting early on that crisp November day, the future generation of Arizona Western College students swarmed into the Schoening Conference Center by the busload to take part in the fourth annual Majors For Matadors fair.

These eager high school students were given tours of the facilities and talked to campus representatives about what jobs are available in particular fields.

They learned about degree requirements and were given time to get acquainted with future fellow students and instructors.

The Fair gave students the opportunity to learn about the various disciplines and majors available at AWC and to help inspire them to choose a major. All eight instructional divisions at AWC were in attendance at the event and most majors were covered.

The display booths also gave those major programs the chance to persuade undecided students to join their field of study. Booths ranged from the flashiness of the biology department, to the simplicity of media arts, to the fun of massage therapy.

"Research shows that students who are committed to an academic focus are more likely to succeed in college," said event organizer Mel Parker.

Feedback from the high school and college students showed that nearly two-thirds are closer to finding a major after attending the Majors Fair, while nearly three-fourths said they would recommend the Majors Fair to other students.

"For me, the most positive aspect was observing the enthusiastic interaction among faculty, staff and students," Parker said.
It just goes to show, the college experience begins before stepping into that first classroom.