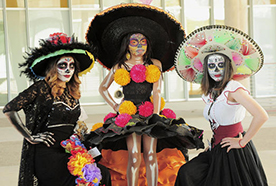 Life of the dead

Dead-tired of waiting, Catrines and Catrinas have arisen to show just cheerful and colorful the afterlife really is.

The Yuma Young Adults Club held its hugely successful second-anniversary costume competition involving Arizona Western College students and the community. Participants dressed in their best Catrin/Catrina and showed how creative they could be in honor of Mexican tradition of Dia de Muertos, the annual holiday honoring all those who have passed away. More than 100 people showed up to cheer for their favorite among the eight contestants.

The club and its advisor, Antonio Carrillo, organized the event to show the importance of Hispanic culture in our campus life. Prizes were $100 for first place, $50 for second and $25 for third. They also held a special case award that would later be revealed.

"A group of students were thinking what kind of event we should we do that is colorful, attractive and still part of our culture," said Carrillo.

To introduce the event, all the audience for the event, one of the judges, AWC Financial Aid Scholarship Specialist Carlos Ramos, gave an introduction of the popular holiday.

"Also known as Lady of the Dead, Mictecacihuatl was the keeper of the bones in the underworld, and she presided over the ancient month-long Aztec festivals honoring the dead," explained Ramos.

They would have to compare the costumes based on their darks and lights, their overall use of color and their feel in relation to the holiday.

As the competition began, the eight contestants -- Karina Botello, Tawneel Cook, Erika Mercado, Zeila Ochoa, Keven Urbina, Crystal Mojardin, Priscilla Huerta, and America Ramirez -- walked around the seated audience and then in front of the judges' table to give a good look at the costume. As the audience waited for the results, Ramos offered a surprise twist: the audience would get to vote, too, for People's Choice.

First place went to youngest participant, the 9-year-old Ramirez. She had a large black and orange dress resembling an altar and an old black-and-white picture hanging from the back of her dress surrounded by small tequila bottle imitations and candy skulls.

In second place was Mercado with a long black dress and colorful flowers around her waist and down to her ankle. In third place was Huerta in her mariachi attire and colorful sombrero with string shapes in red, orange, green and yellow. With 32 votes, Erika Mercado was the winner for People's Choice.

A compilation of images from the event has been posted on the Yuma Young Adults Facebook page.

"It was really beautiful," said the first-place winner, adding that she wanted to honor her departed grandfather, Juan Ramirez Lopez.

"We did it to represent him," said Ramirez' mother, Jennifer Solis, adding, "It took me about a month to finish the dress."

People laughed and cheered, screamed and whispered, came and went -- all with something to remember Las Catrinas by.

"It is important for Hispanics to have this type of event. "Oh, and for world peace," beamed AWC student Bren Blanchard.

"It was really fun that they took the people's choice," Mary Schaal, AWC Dean of Institutional Research. "The whole altar was there -- so creative, so impressive."