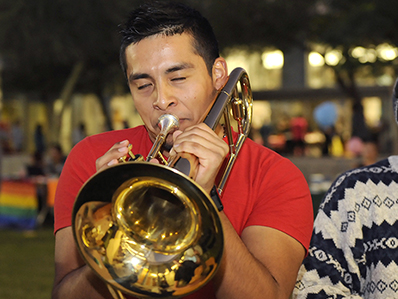 Family Night has a quince

As Arizona Western College's 15th annual Family Night rolled in, so did community members from all across Yuma County. As they arrived to the sound of light jazz music, they received warm welcomes from the main booth, and a gift bag containing coloring pages and a map of the different booths available.

"It's a great event that brings the community together in an educational setting," said AWC English instructor Laura Vasquez, who was tending the Yuma Art Center booth.

Community members manned various booths representing agencies that help out in the community. One of these was the Honoring Eye and Organ Donor program's booth, which was tended by Janice and Rudy Wallace.

"We started coming to Family Night and encourage people to become donors because our daughter has a donated heart," they said.

Among the attendees of Family Night, Kevin Smith, a Captain in the Marines and a member of MAG-13, brought his wife and two children.

"I enjoy having the college as a neighbor because it creates a greater sense of community," said Smith. "As part of the Marines, it adds another facet to the friendly culture in Yuma."

Kids were able to enjoy the many different games available at the booths.

At the League of Artists booth, the game of pin the brow on Frida Kahlo and the painting drew the kids, as did the free Sargent crayons in all the colors of the rainbow. However, the pottery on display there also drew the adults.

"They are so nice! And I love all the colors," said six-year-old Alexandra Camacho, a little sister to an AWC English Major. "When I'm big, I'm going to paint like them!"

Another big hit was the booth by the AWC Basketball players, where kids could shoot a few hoops.

"I had a good time interacting with the youth," said freshman basketball player Chase Rodgers.

The Engineering Club drew attention to itself through the use of odd-looking machines and marshmallow guns. Members running the booth were encouraging people to join the club, which meets every Tuesday at 1:30 p.m. in the ET building.

The Engineering Club is also involved with the community, for example giving demonstrations at local high schools and middle schools. Money that they fundraise is used to buy engineering learning kits.

Overall, Family Night was a big success -- or, as Andale the school mascot says, "Moo!"