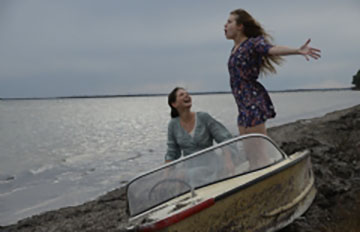 For as little as $2.50 with a student ID, or $5 without one, you can watch award-winning independent films at Thursday at the Theatre in Yuma's Historic Art Theatre on Main Street. The series, now in its 11th year, is brought to you by the Arizona Western College Foundation and sponsored by KAWC Colorado River Public Media, AWC-NAU Academic Library and the Yuma Art Center
The evening event begins at 7 p.m. on the first Thursday of each month -- with the exception of August, when it falls in the third week. The doors open at 6:30 p.m. so that viewers will have time to purchase $2 bags of popcorn and $2 sodas and find a good seat. Before the feature film, AWC Professor Michael Miller gives an introduction and any disclaimers, and an award-winning short film is shown.
After both films, interested viewers are welcome to stay and join Professor Miller's film class to discuss and critique the films.

"In her second directorial outing, Melanie Laurent offers a compelling, superbly acted portrait of an adolescent friendship perched on the brink of obsession." -- Scott Foundas, Variety

Synopsis: A taut, nuanced story about the depths of female friendships and the dark side of teenage infatuations, Breathe, the sophomore directorial effort from Melanie Laurent (Inglourious Basterds, Beginners), is an assured adaptation of the sensational French young-adult novel of the same name. Charlie (Josephine Japy) is 17 and bored. Her estranged parents are too caught up in their own drama to pay her much attention. School holds no surprises either, and Charlie grows tired of her staid friends. Enter Sarah (Lou de Lage), a confident and charismatic new transfer student who brings with her an alluring air of boldness and danger. The two form an instant connection, and through shared secrets, love interests and holiday getaways their relationship deepens to levels of unspoken intimacy. But with this intimacy comes jealousy and unrealistic expectations, and soon the teens find themselves on a dangerous trajectory toward an inevitable and unforeseen collapse.

Synopsis: John (Jack Reynor) lives with his mother, Jean (Toni Collette), in a social housing suburb and ekes out a meager living as a nocturnal taxi driver. John returns home one morning to find his mother unconscious from an alcohol overdose -- not the first time. Jean violently rejects John's attempts to help as well as his intentions to unite the family. When Jean is offered an opportunity to recover, with no savings or insurance, John is forced to offer his services to a petty criminal to help pay for his mother's costly rehab program. John is subsequently faced with a task that may change him and his family's lives forever.

"...thrilling and packed with illuminating details and striking personalities..." -- The New York Times

Synopsis: Set against the backdrop of a 14th century, black plague-stricken Florence, ten young men and women escape to a country estate where they spend their days telling stories of love, fate and resurrection. From legendary Italian filmmaking brothers Paolo and Vittorio Taviani, directors of the Palme d'Or winning Fiorile and Golden Bear award-winning Caesar Must Die, Wondrous Boccaccio is a visual and poetic tribute to the stories that emerged from one of the darkest periods in Italian history, and the imaginations that quietly fueled them.

"A classic adventure film of the best kind, and one that's rarely seen these days!" -- Jay Weissberg, Variety
Synopsis: 1916. While war rages in the Ottoman Empire, Hussein raises his younger brother Theeb (Wolf) in a traditional Bedouin community that is isolated by the vast, unforgiving desert. The brothers' quiet existence is suddenly interrupted when a British Army officer and his guide ask Hussein to escort them to a well located along the old pilgrimage route to Mecca. So as not to dishonor his recently deceased father, Hussein agrees to lead them on the long and treacherous journey. The young, mischievous Theeb secretly chases after his brother, but the group soon find themselves trapped amidst threatening terrain riddled with Ottoman mercenaries, Arab revolutionaries and outcast Bedouin raiders. Naji Abu Nowar's powerful and assured directorial debut, set in the land of Lawrence of Arabia, is a wondrous "Bedouin Western" about a boy who, in order to survive, must become a man and live up to the name his father gave him.

"An intimate and insightful delve into the life of a charismatic man whose passion for art is still intense and whose wry sense of humor still shines through..." -- Mark Adams, Screen Daily

Synopsis: Hockney weaves together a portrait of the multifaceted artist from frank interviews with close friends and never-before-seen footage from his own personal archive. One of the great surviving icons of the 1960s, Hockney's career may have started with almost instant success, but in private he has struggled with his art, relationships and the tragedy of AIDS, making his optimism and sense of adventure truly uplifting. Hockney is funny, inspiring, bold and visionary.