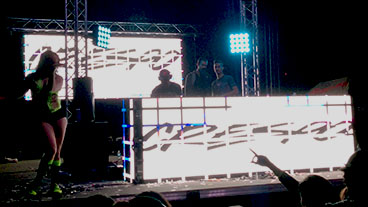 EDM in Yuma is just getting started

It had been more than a year since the last time I attended a festival of electronic dance music. So, when I heard that College Shout-Out was putting a festival together here in town, I did not want to miss out since events like this are scarce in Yuma.

The festival took place at the Yuma Park and Swap with the purpose of bringing EDM fans of Yuma together to "turn up" and listen to awesome music. The festival featured a mix of local and out-of-town DJs, really giving it a different sort of vibe from what most Yumans are used to.

One of the main headliners, Philip Talieh from Sacramento, Cal., put together a great set that led to the headliner, the decorated and diverse DJ "Daniel" Crespo. Crespo has headlined at big-time music festivals all over the world from Rio de Janeiro to New York and has opened for many big names like Wiz Kahlifa, Steve Aoki and Avicci. Using samples from Ottis Redding and the Bee Gees and mixing in the Latino flavor of salsa and merengue, Crespo's style aims to erase all lines between genres, sending his audience on a journey through the music that has shaped him.

The good times kept rolling after the show at the VIP after-party, which featured a couple of local DJs and some big prizes that were handed out. Two people got scholarships, another won a trip to Cabo San Lucas and someone else won two tickets to the Electric Daisy Carnival in Las Vegas, which in recent years has become one of the best EDM festivals in the world.

Before the event, I was a surprised that most of the people I asked around campus had no idea that this event was even happening. Most of the people that I asked responded by saying, "There's an EDM festival in Yuma?" And some who did know about the event said, "I'm not going. It's probably going to be lame."

Some people who complained about the price of the ticket said, "If it was Skrillex or Basenectar, I would go." Not a lot of people know who DJ Crespo is, so why would they pay $25 to go see him? With that said, seeing one of those two world-class DJs would cost between $50 and $80 dollars. Sure, those shows are on a whole different level, but eventually we could get them here in Yuma.

In order to have better caliber musicians to play shows locally, the music scene has to build a solid reputation. Yuma's music scene is still trying to get up and running, but there are enough people to make the music scene here explode. Demographically, people ages 18-27 make up almost a third of Yuma's entire population, so there should be more local music shows and more promotion of these events.

Yuma has a lot of live music junkies like me. Music has been one of the most consistent elements in my own life, and live music is definitely something that every human needs to experience. There are always local EDM, metal and jazz shows going on; all one has to do is go out find them.
College Shout-Out will be hosting another event on March 4. So, if you missed out in February, this is your chance to redeem yourself. Tell as many people as you can, and actually go. Music festivals are heaven on earth, where beautiful souls come together to spread joy and happiness. There's nothing like it.

What have you been doing to pass the time at home?
Watching Netflix (or other movies)
29%
Playing Animal Crossing (or other games)
20%
Cooking/Baking
7%
Reading/Writing
13%
Gardening
30%
Total votes: 99