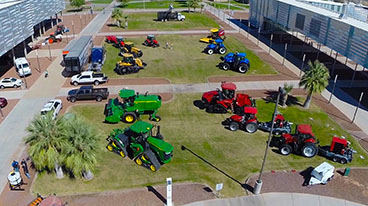 This year's 10th annual Southwest Ag Summit was held on Feb. 24-25 at the campus of Arizona Western College, beginning with the field demonstration event and ending with the Harvest Dinner. The Summit, held at the 3C building, consisted of about 75 vendors.

The Ag Summit's vision is to create an agricultural gathering that not only will bring knowledge and innovation to agriculture in the desert regions but also will continue to make this area known throughout the world for the quality products that are grown in Southwestern Arizona.

AWC and University of Arizona students were welcome to attend this year's summit to see what the future of the agricultural industry holds for students. They are also shown first-hand that there is more to it than just farming and that there is also a technical side to it all.

If a student is considering a career in agriculture and meets the educational requirements, that student can become a plant doctor -- that is, "a licensed pest control adviser who works directly with growers as a consultant," said agriculture professional Shannon Douglass.

The AG Summit invites honored guests to be keynote speakers at different times during the two-day event. Experts in agriculture gather in one place to present their lecturers on subjects such as irrigation management, immigration reform, fresh produce, safety crop protection, energy conservation, new cropping technology and urban encroachment.

One of the keynote speakers was Roberta Cook who spoke about fresh fruit & vegetables consumer demand, trends and marketing. Cook earned a Ph.D. in Agricultural Economics from Michigan State University and since 1985 has been the Cooperative Extension Marketing Economist in the Department of Agricultural and Resource Economics at University of California Davis.

"It's been a remarkable ride for me," said Cook. "Agriculture has changed so much over time. The economic downturn accelerated the pace of change in the field of the marketing system in 2008."

Among the many chemical companies represented, Agzyme is a fertilizer company that supplies the many crops found in the desert Southwest. The chemical activates the microbes found in soil, which helps get the plants the nutrients they need to reach their potential.

"Adding Agzyme increases growth for plants, which stimulates bacteria in soil to help those plants," said Tony Novak from Boise Idaho. "Bacteria is alive and needs to be fed to make things grow, and that's where we come in."

The Harvest Dinner was held at the Quartermaster Depot State Historic Park. The menu included duck and short ribs, but the highlight of the night was the variety of vegetables.

Yuma is surrounded by millions of acres of rich fertile land and, being that this area is the winter produce capital of the world, it is the perfect location to hold the summit. The Ag summit is the fine tuning of businesses in Yuma and surrounding areas to form a bond in the agriculture industry, offering a clearer understanding of the technical scientific improvements of products, and of the safety considerations involved in getting clean healthy vegetables out to the country's dinner tables.

The Southwest Ag Summit would not be possible without the continued sponsors and exhibitors as well as many others who come together to present an informative and impressive event.