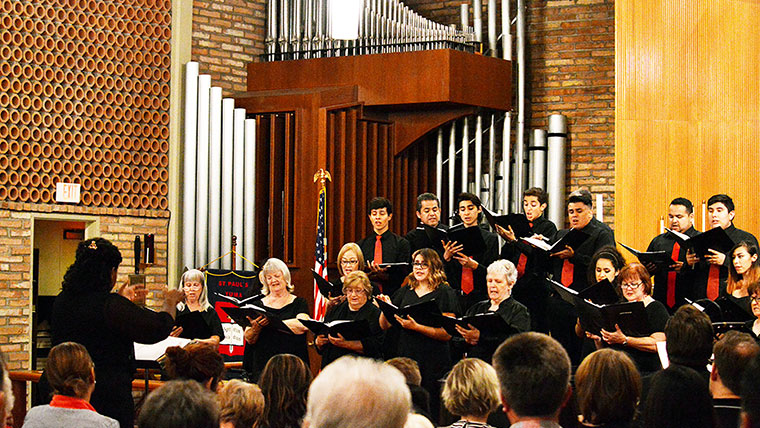 Howling tunes at the Harvest Moon

The harvest season has begun, and the choir of Arizona Western College welcomed it with music. On Oct. 7 and 9, the AWC Chamber Singers, AWC Youth Choir, and the Yuma Chorale ushered in autumn. Directed by Professor of Music, Deltrina D. Grimes for the adult singers, and Laura Surguine for the youth, the concert, Music Under the Harvest Moon, provided the opportunity to listen to autumn-themed songs in a special Yuma space.

Deltrina D. Grimes introduced the evening of music with a short speech. Her introduction was followed by the rousing anthem of AWC, “Ye Matadors,” sung by the AWC Chamber Singers.

After the anthem, the fall-themed songs began. Each song told its own story, mostly reminiscent of the season. Dressed in black button ups and red ties, the bass and tenor singers set the tone. Their voices reverberated around the room and the altos and sopranos weaved their own voices in to create a song that lulled the listeners into a state of security.

The song following the anthem was “Nightfall,” which depicts the end of a day. The rendition held a light tone, with a softly sung first stanza. The volume steadily grew as the song transitioned from the setting of the sun to the rising of the moon. Accompanied by a pleasant piano harmonization, the music drew listeners into a world without cares. With each passing song, the spell deepened, bringing forth feelings associated with autumn.

The AWC Chamber singers finished their section of the performance with American folk songs, the last being “Got a Hog and a Pig,” which discussed a man who had enough wealth to own livestock and who was in search of a “pretty little gal” to care for them while he was gone.

The song was very lighthearted and conveyed archaic ideas about a woman’s place in the world. The song’s dialogue was between the men and women of the choir, with the men first speaking of their desire to find a lady, and the women replying with their need for needles and thread to sew their true loves to their side.

Following the AWC Chamber Singers, the AWC Youth Choir entered the stage. Clad in black polo shirts, the youths presented a contrast to the scene created by the more experienced singers. With rounded faces and a hesitant demeanor, the children were an endearing sight. Many of the young singers were new to the music scene, but when they began to sing they commanded the stage.

The youthful singers performed three songs, comprising the shortest segment of the evening, beginning with “Kwaheri,” which had a beat that was distinct and a tone that was uplifting and fun to listen to. Their final number, “Feel Good,” sung without instrumental accompaniment, began with the performers clapping a beat and ended in thunderous applause from the audience.

The final performers were the Yuma Chorale, which was comprised of many of the same talented singers in the AWC Chamber Singers; joined by members of the Yuma community. The beautiful intermingling of tenor and bass along with the soprano and alto appeared again, reminiscent of the first group of singers. The warm voices blanketed the room, eliciting an admiring hush from the crowd. Not one person’s attention was drawn from the rich sounds emanating from the front of the room.

“Where Dwells the Soul of My Love” was accompanied by Anna Jarocki, a talented cello player and student at AWC. The instrumental accompaniment added to the performance’s diversity with the haunting sound of strings. The love song had the depth of tone, with the majority of the song being dominated by tenor and bass singers and accented by the low keys provided by the cello. This caused resonance, with the song lasting in the ears of the audience, even after the singing had ended.

The finale of the evening was titled “The Lord Bless You and Keep You.” The night came to a beautiful closing with the final song’s deep tone and the singers’ wonderful harmonization. The soothing combination of voices that made up the final song of the evening brought the realization that it was a blessing to not have missed such a beautiful performance.