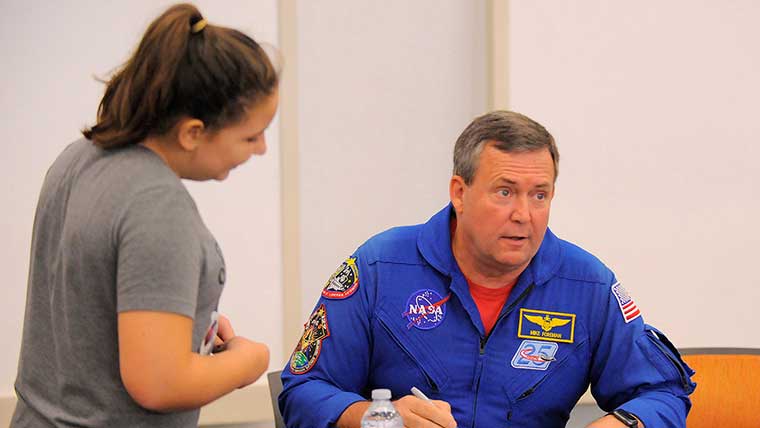 Visiting astronaut: “Reach for the stars”

NASA’s vision is “to reveal the unknown for the benefit of humankind.”

In that spirit, Captain Mike Foreman, a former naval pilot and National Aeronautics and Space Administration astronaut, shared his insights from working in space to a fascinated audience in Arizona Western College on Sept. 22.

The event, sponsored by a grant from the Science Foundation of Arizona Plus 8, was eagerly attended by many community members as well as students from Castle Dome Middle School, Gila Ridge High School, AWC and NAU-Yuma.

After sharing the story of how he became an astronaut, Foreman answered many questions from curious students. One question: “Do astronauts in fact eat dehydrated ice cream?”

“Astronaut food is the best marketing ploy I’ve ever seen,” said Foreman. “We never ate that stuff, never took it with us.”

Foreman also admitted that he had never seen an alien, but said he had seen shooting stars – meteorites – below him in the Earth’s atmosphere.

Working in space is not without its challenges, said Foreman, who described sleeping in the ISS.

“I floated into my sleeping bag which was tethered to keep me from floating around and bumping my head,” he said, “but turn the lights out and I’m just floating weightless in the middle of a dark room telling myself to fall asleep.”

Was he afraid of flying into space?

“The training that NASA gave me was so good that I was confident going into the mission,” he said. “Usually you’re thinking, ‘What’s the next procedure?’ But occasionally there’s a few seconds where your mind wanders to ‘Is this the best place to be right now? Was this a smart decision?’”

Foreman believes he made the smart decision and encouraged students interested in NASA to study anything related to science, technology, engineering and mathematics (STEM) because NASA employs a variety of scientists ranging from computer scientists to botanists.

“Study something you like because you’re more apt to do well in a field you like than one that you just chose,” he said.

After the questions were asked, a lucky group of 30 randomly selected audience members was given the opportunity to receive autographed portraits of Foreman.

Earlier in the talk, Foreman played a video from his last mission, STS 129, and told the story of his career.

The story began half a century ago in Ohio, when an 8-year-old Foreman decided that he wanted to work in aeronautics. From that point on, he set his sights on the Naval Academy and worked on improving his grades in school.

Throughout all of this, Foreman had been applying to NASA every two years since 1985, but it took a decade for him to be called to Texas for an interview. One of the extensive tests he had to take was a claustrophobia assessment in which he was zipped up in a three-foot long duffel bag for an unknown period of time.

He waited nine months to hear back only to discover that he had been rejected; he was finally selected after his eighth application. He went on to undertake two space shuttle missions, STS 123 and STS 129, on the space shuttle Endeavour and worked in the International Space Station. By the end of his NASA career, he had logged more than 637 hours in space and had done five space walks.

Those who had co-ordinated the event were immensely pleased with the outcome.

“The students were so happy and it helped them to see that you can be successful and never give up,” said Reetika Dhawan, professor of mathematics. “It’s okay if you get rejected, it’s okay if you have to try again—that’s what this was about.”

Dhawan and Dr. Linda Elliott-Nelson, vice president of Learning Services, were also able to bring Foreman to Castle Dome Middle School to speak to a select group of students, and to host a special dinner at Da Boyz in downtown Yuma with a group of AWC faculty and staff.

“It was a really nice crowd of AWC people,” said Brad Pease, a professor of fine arts who attended the dinner. “For someone who goes on a tour talking and talking, he’s very patient and wonderful about the whole experience.”

As a follow-up to last month’s visit, Dr. Elliott-Nelson is looking for partners to fund a three-day stay for Foreman to speak to as many students as possible.

“We are hoping to be able to bring him back in February,” said Dr. Elliott-Nelson. “He seems to have a very inspiring story. It’s not just what’s it like to work in space and what’s it like to shoot off in a rocket to escape the atmosphere and then look at the earth from a distance; it’s that he applied eight times to get on his path to becoming an astronaut and he was rejected seven times.

Among the takeaways for students was the encouragement to persevere towards a goal. Another was the advice that, if they want to go into science, technology, engineering or math, they should prepare themselves – and set their sights.