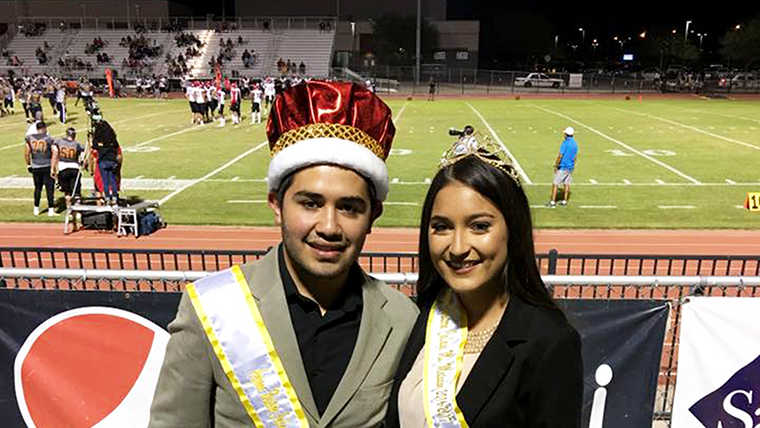 After a process involving nominative voting and interviews, Jesus Landin, 20, and Talia Baca, 19, were crowned Mr. and Ms. Matador at the Homecoming game on Oct. 29.

The two were each awarded a $500 scholarship to continue their studies at AWC and were given the responsibility of representing AWC at special events like the Veteran’s Day Parade and Family Night.

Mr. and Ms. Matador must serve as role models to the community, and if anyone can fill that role it’s certainly Landin and Baca. In an exclusive interview for the Western Voice, they share about what it’s like to walk in their shoes:

WV: How did you feel when you learned you were nominated for the title?

MR: I couldn’t believe it. The satisfaction to think that students actually thought of me…, for them to actually vote for me and for me to be nominated, it’s an honor to think people see me in that way.

MS: Being nominated was half the battle. I was very, very happy, but I knew I had to up my game. I didn’t stress about it too much. I knew that if I just be myself I’d do well.

WV: What kinds of question were you asked in the interview?

MR: Personal questions. The one I considered the most personal was to name who I considered the most positive influence in my life. I mentioned my coworkers. The reason being is that when I started attending AWC, I was having some personal issues with my family. When I got the resident assistant position, I started meeting new people and now these new people that I met have become my family.

MS: Another question was “What has been your best experience at AWC?” and it was hard for me to pick one. I basically said “everything” because it’s helping me to become the woman I want to be, and it’s never too late to do what I want to do. When I got to college…, I knew a little bit about the Matador Ambassador program, but I’ve never been in a club before. I got into it, and now I’m the president. I’m doing other clubs and finding other roles like Ms. Matador.

WV: How important do you feel involvement in your school is?

MR: It’s everything. I wasn’t really involved in high school because I came from Mexico when I was 15 years old. We do have clubs over there, but I think in the U.S. they place more emphasis on involvement in clubs, sports and extracurricular activities. One of my professors here once shared this quote with me: “The unexperienced life is not worth living.” I think it’s fitting because involvement is gaining experience. When you get involved, you start to understand more of who you are and what you want to become.

MS: Involvement is very important. It’s more than just going to college to expand your knowledge, it’s more than just getting a degree, but it’s improving yourself. You’re improving your social skills, you’re joining clubs and you’re enhancing your leadership skills. With the ambassador program, I go to high schools around the Yuma area and tell them about AWC. I answer any questions that they have about college, and I’ve fallen in love with that. It’s really what I want to do with my life, to get people to college, because I want them to feel the same experience that I’m feeling.

WV: What do you plan to do in the future?

MS: My major is in secondary education, so I want to be a high school teacher and coach. While I’m teaching high school, I want to obtain my master’s degree and a doctorate. From there, the possibilities are endless. Ever since I was a little girl, everybody would be tired at the bus stop complaining that they don’t want to go to school, but I would just be there with my backpack ready to go, and I really do love school. I know that this is where I’m supposed to be, and I want to help others get here.

MR: I have two passions. The first is my major, biomedical engineering. For example, there are some statistics about how people are dying from kidney failure. 50,000 people per year die because of it, and that’s what biomedical engineers try to fix. My other passion would be going back to school and helping with outreach. When I was attending high school I had some bad experiences with advisement. I was in the top ten at my school, and I noticed that some of my friends were not given the same advisement sessions as we were. Just because you’re not getting good grades in high school doesn’t mean that you can’t make it. Maybe you’re going through a rough time, and you just need that one person to reach out to you.

WV: So now that you get to be Mr. and Ms. Matador at all sorts of events, what is it like when you’re out there?

MR: It all goes back to being looked up to. We were at the Homecoming game, and there were kids playing around and they were approaching us and asking, “Who are you?” “May I use your crown?” and it feels great.

MS: Yes, like one little girl, she goes, “There goes the queen!” Does she think I’m queen of the world? I’ll take it!

WV: If you could say anything to anyone reading about you, what would you want to tell them?

MS: I hope that they think they have the ability to accomplish anything that they set their mind to. I want to inspire people of all ages to have confidence. It’s never too late to be who you want to be. Always pursue your passions and believe in yourself.