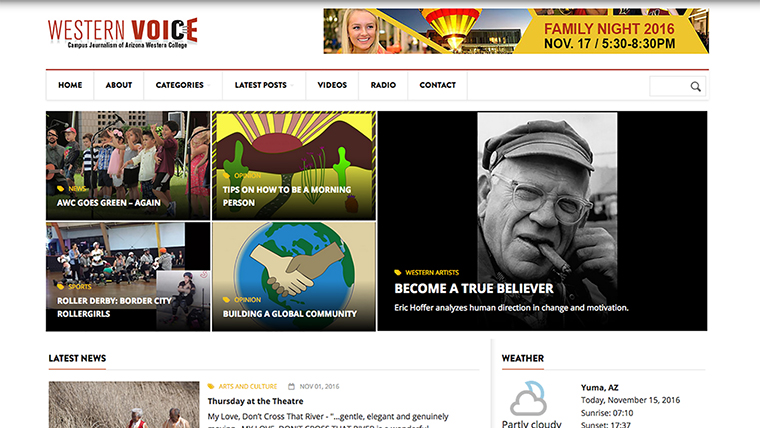 Western Voice online – the next generation

The news team for Western Voice, Campus Journalism of Arizona Western College is presenting a new face for the web version in order to meet the changing needs of its readers. While the Voice has had a presence on the Web for several years, the site was overdue for a fresh look that offers an easy-to-access interactive format.

After half a century of distinguished existence as a conventional campus newspaper – evolving through several formats, from saddle stitch to broadsheet to tabloid – Western Voice will now offer a fully interactive online platform, in addition to the paper version distributed around the service area.

One of the features of the redesigned web site is enhanced interactivity, including a comments section and polls that seek input from readers. There also is a weather application as well as a space for upcoming events.

Maybe most enticing is that the site is designed to be easily read on both mobile devices and desktop computers, and it is supported on major browsers like Firefox, Chrome, Safari and Internet Explorer 9 and above.

The new site also offers modern methods to tell stories with multimedia content and larger images. It will retain much of the original organization, while rising to the standards of modern web conventions. Not only will readers be able to interact with our Facebook and Twitter accounts, but they can send messages, questions and letters to the editor to azwesternvoice@gmail.com and to western.voice@azwestern.edu.

Western Voice, sponsored by AWC’s academic Division of Communications, is a product of the Media Arts program. Most of the articles showcase the work of students in the News Writing (JRN 125) and Photojournalism (JRN 135 & 235) classes, but its content comes from many other sources as well.

Western Voice provides a space to coordinate all news for its extended family. All members of the college community (and the public, for that matter) are welcome to contribute news, articles and information on upcoming events.

Remember that the newspaper and web site are the voice of all the stakeholders of Arizona Western College, which includes not only the Yuma campus but also South County, the downtown location and the center in La Paz County. Then of course there are the constantly expanding university partnerships with NAU-Yuma, UofA-Yuma and ASU-Yuma, not to mention AWC alumni, future students, their family and friends and our many other supporters, including both full-time and part-time residents.