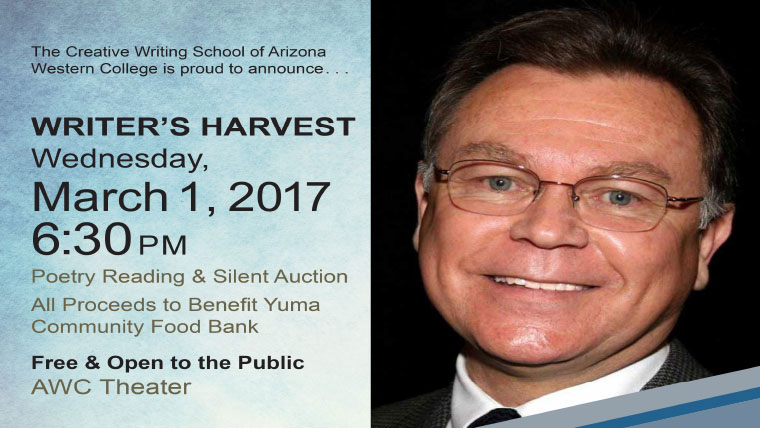 Yuma, AZ (February 23, 2017) –The Creative Writing School of Arizona Western College will be presenting “Writer’s Harvest” on Wednesday, March 1st at 6:30pm in the AWC Theater.  The event will include a silent auction and a poetry reading by Alberto Alvaro Ríos, Poet Laureate of Arizona and National Book Award Finalist. All proceeds from the auction will benefit the Yuma Community Food Bank.

Ríos is the author of ten books and chapbooks of poetry, three collections of short stories, and a memoir. Ríos is also a Regents’ Professor at Arizona State University, where he has taught for over 30 years. Arizona Western College is thrilled to have Ríos serve as the 2017 Distinguished Visiting Writer.

The public is invited to attend this free event.  For more information, please contact Dr. Eric Lee at eric.lee@azwestern.edu or (928) 344-7738.

Day of the Refugios

Saint’s day instead of one’s birthday is common.

I was born in Nogales, Arizona,

On the border between Mexico and the United States.

The places in between places

Themselves, with their own holidays

Taken a little from everywhere.

My Fourth of July is from childhood,

Childhood itself a kind of country, too

It’s a place that’s far from me now,

The Fourth of July takes me there.

In that childhood place and border place

It meant more than just one thing.

In the United States the Fourth of July

It was the United States.

In Mexico it was the dia de los Refugios.

I come from a family of people with names,

Names that take a moment to say,

Names you have to practice.

These were the names of saints, serious ones,

And it was right to take a moment with them.

I guess that’s what my family thought.

The connection to saints was strong:

Her name was Refugio,

And my great-grandmother’s name was Refugio,

And my mother-in-law’s name now,

Refugios and shrimp cocktails and sodas.

Fourth of July was a birthday party

For all the women in my family

Going way back, a party

For everything Mexico, where they came from,

For the other words and the green

These women were me,

What I was before me,

So that birthday fireworks in the evening,

In that way the fireworks were for me, too.

Still, we were in the United States now,

And the Fourth of July,

Well, it was the Fourth of July.

But just what that meant,

In this border place and time,

It was a matter of opinion in my family.