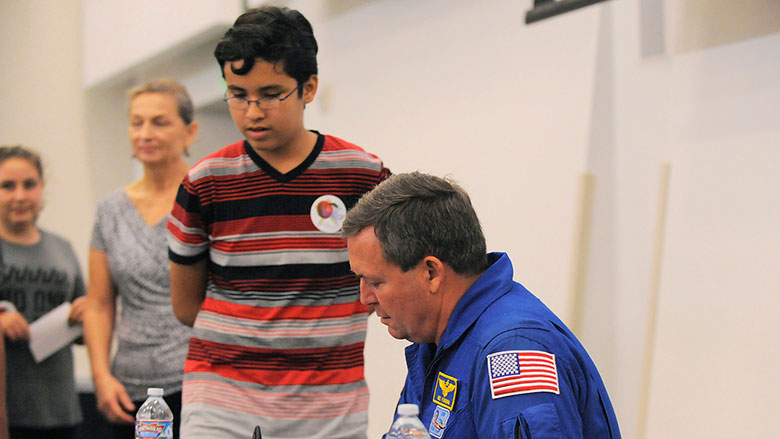 Life outside the earth

"We need to take care of our planet."

What’s it like becoming an Astronaut and then living for weeks in the silence and weightlessness of space?

Seeking an answer to those questions is what brought Yuma locals and students back to Arizona Western College on Feb. 15, when astronaut Mike Foreman stopped by for the second time to talk to students and Yuma locals about his experiences working for NASA. Elementary and middle school students as well as their parents attended the event at the AWC’s Schoening Conference Center to listen to Foreman’s stories and his advice for aspiring young astronauts.

Astronaut Foreman mentioned that he grew up in the Ohio suburbs and knew he wanted to become an astronaut since at the age of eight.

“I practiced scuba diving in the world’s largest swimming pool in Houston for hundreds of hours and trained for 10 years before my first mission,” said Foreman.

In college, Foreman majored in aerospace engineering and got his master’s degree in analytical engineering. He then became a navy pilot to meet his goals in the field of astronomy. In 1998, he along with 24 American astronauts graduated from the Naval Academy in Annapolis, Md.

Although it wasn’t an easy ride, Foreman was officially accepted by NASA after applying eight times. Once he did, he was able to live his dream and lift off into space. In addition, he got to meet John Young from the famous film Apollo 13. In describing the experience of lift-off, Foreman stated that it “feels like a car-wreck and once you’re there, it’s as if you are in the vaccum of space and there’s nothing out there.”

Despite all the training, Foreman said he was a little nervous at the beginning taking on his first spacewalk. During his first mission, his favorite song, “Lions & Lucy,” was played on the spaceship by mission control.

Foreman stood center stage and showed clips of his experience and said that one of the most powerful motors to be used for a spaceflight are the SRB’s (solid-rocket boosters), which have a mass of more than two million pounds and a burn time of about 127 seconds.

Among the facts Foreman mentioned concerning his experiences is that temperatures inside the spacecraft can vary depending on how close it is from the moon or sun, sometimes getting down to -70 degrees inside and -205 degrees outside. However, the spacesuits not only provide the astronauts with oxygen but also protect them from those extreme temperatures.

When in space, the spaceship orbits every 90 degrees and allows its occupants to experience several sunrises and sunsets during a 24-hour period. Foreman mentioned that he has been about 238,000 miles away from the moon and 250,000 miles closer on the other side.

When asked about what improvements he sees for future space station colonies, he replied, “They may be on other heavenly bodies because technology is always improving.”

A bit of advice

Toward the end of the presention, Astronaut Foreman advised students to find their career path; and, if it involved astronomy, going to Massechusettes Institute of Technology or to a Naval Academy would help them get started. Lastly he mentioned that NASA likes to pick successful people, so it’s also important to do your very best at school and even maybe get two or three degrees in technology or engineering.

“It’s really a busy schedule, being an astronaut,” he said.

Being a spiritual man, he described how his experience in space made him feel closer to a higher power and how crazy it seemed that he could cover the planet where all his loved ones live with just a finger.

His main message to people is that earth is our home: “We need to take care of our planet.”