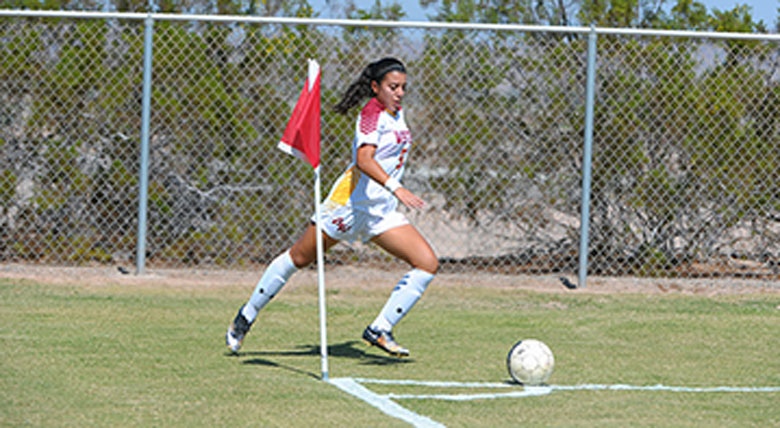 A big year for women's soccer

The women’s soccer team at Arizona Western College had an incredible season this past fall. They finished with an outstanding record of 15 wins and 3 losses and made it to second place. However, they came up short in the championship game.

After they arrived on campus August 3, the team had only two weeks to prepare for their first game. They started off rough in practice without much chemistry since majority of the team was new and there were few returners. They had a great attitude, though, exemplified by goalkeeper Cyan Scott, who would say, “Always work hard no matter what the outcome is.”

However, in their first game they destroyed Glendale 14-1, with Michala Vereen scoring 4 goals to make Player of the Game. But, after they lost 4-3 to Chandler-Gilbert, first-year Head Coach Alexia Poon demanded that the girls focus more in practice, and the girls responded by beating South Mountain 12-1, controlling the pace from start to finish.

The Lady Matadors won their next three games, making it look easy. The chemistry was coming along, and the girls started believing in each other. Sophomore Cinthya Samaniego’s performance made her a player to watch out for with her skills and her will to win.

By the middle of their season, the Lady Mats had a strong record and made it clear they planned on making it to the playoffs. But they started to face some adversity, losing two games out of the next three. Forward Kaylyn Barnes stepped up and took the leadership role, keeping the team together, and most of the girls were still in great shape to make the playoffs. The game against Mesa started out tough, but Samaniego came in clutch with the winning goal.

The season was looking good for Coach Poon as the girls faced their biggest challenge against Pima, who had the edge with their size. After that tough 4-2 loss, the Mats came together the next day in practice to hear Barnes’s advice: “When things get tough, it’s not about what you’ve done, it’s about what you do.”

The team finished off their season strong, winning their last five games heading into the playoffs. In their first game against Pima, the team they loss to earlier in the season, the girls played their hearts out, winning 4-3.

Then they had one week to prepare for the championship game, to be played in Phoenix on Oct. 31. The girls came into the game slow, and Phoenix College jumped on them and controlled the whole game.

Although the Lady Matadors came up short, it was all a learning experience, and they’re already hard at work for the fall season.