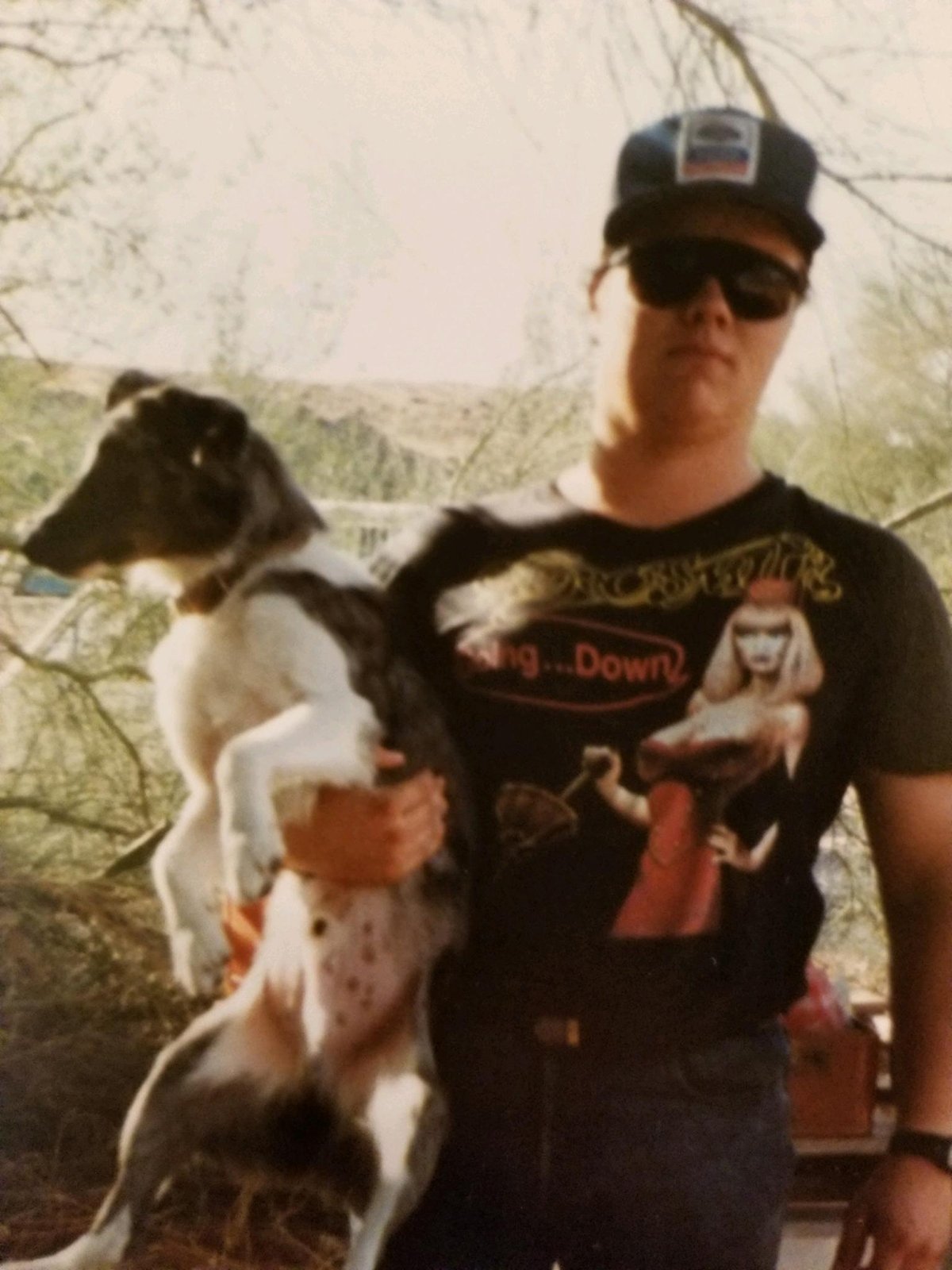 The author in younger, rowdier days

Let Bygones Be (Or: Why I've Skipped All My High School Reunions)

I have never attended any of my high school reunions and have never had the slightest desire to. I have, however, pondered upon why this is so.

Early on, I scoffed at the idea of attending. The first opportunity came about at the 10-year mark, when I was 28. It seemed ridiculous to me. Ten years? Why would they want to see each other after such a short period of time? Nobody had changed much really. I remember joking to those who inquired that it wouldn’t be any fun since no one had even had a chance to wreck their marriages or gotten very fat or bald yet.

About five years later, I heard some fool that I had been in high school with speculate that perhaps we should have one at the 15-year mark. As you can probably guess, I met that speculation with similar disdain.

Then in 2011, it was time for the big 20-year, yada yada yada. I have in years past claimed that I was waiting to go to this one, for the previously stated criteria of baldness, obesity, etc. However, once again I found myself lacking the slightest interest in it. I haven’t heard anyone talk about a 30-year, and that’s just as well since I’m still not getting a tingle over the thought. Perhaps inspiration will come before then, but I won’t hold my breath.

King of the misfits

Sometimes I wonder why I’m not interested in these reunions. As I have pondered it periodically over the years, different reasons have seemed to fit.

For some people, it seems, their high school years were the greatest of their life. Some were sports stars. Some were excellent academicians whose studious habits carried them into good colleges and thus into magnificent careers. Other people reflect fondly on the epic partying that they did and the misadventures that ensued. Others (mostly men), can’t stop fantasizing about how much they got laid and basked in the sexual freedom that they had.

As for me, I couldn’t wait to get out of high school and into the world. I was a misfit. Don’t get me wrong: I had friends, each of them misfits in their own right. I used to joke that I was the king of the bottom feeders. (I was the king because I was the only one who regularly had money and a running vehicle.) Some were skaters and heavy-metal heads, others stoners, others rednecks. I hung out with them after lunch while we cracked jokes about ourselves and everybody else.

I was always nearby and accepted, but I never quite felt like one of them. I liked the rebellious spirit of the skaters and their metal and punk rock but could never skate and didn’t really get fully into the music. I had a friend who was a total screw-up at everything he did; he was lazy as hell and liked to drink and smoke pot. I hung out with him but didn’t do any of the stuff he did. My mother was very straight laced and had spent my entire childhood warning me away from not only those evils but also the dangers of girls.

She herself had three major events take place in the year 1972: she graduated from high school, got married and gave birth to me. She didn’t want me to get tied down too early like she had, I think. I had too much respect for her to rebel. She needn’t have worried much in any event. Even without her warnings about girls, my father had spent my entire childhood decimating any self-esteem I might have tried to develop, and as a result I found it difficult even to speak to girls, let alone impregnate one.

High school was a turbulent time for me as I struggled to find a sense of myself.  I wasn’t good at sports, my grades were mediocre at best and I was too terrified to party or apply myself to the opposite sex. My family was not rich and I had always been well aware that, if I wanted extras in life like a vehicle or spending money, then I was going to have to earn it myself. So, I worked.

I did yard work or odd jobs or just any kind of manual labor to support the old Ford truck that I had bought with six years’ worth of saved 4-H money. My mother was also a workaholic – mainly to be away from my father – and I followed her example. It became a sense of pride for me that I earned all my own money and, as a result, became a major part of my identity. This kept me out of trouble, but it wasn’t the only thing that did so. Fortunately, I had found my niche in the joys of theatre when I was a freshman, and it brought me much needed self-esteem.

I mentioned earlier my friends who were rednecks. One in particular had a ‘71 Plymouth Duster that he was in a perpetual state of putting back together after having wrecked it. He was an epileptic in denial and would have seizures while driving and for some reason steered the car into a power pole each time. When the car was drivable, he would take it to work and steal as much gas as the tank would hold from the farmer he worked for. To be fair, he took his lead from the farmer’s own sons who were all in their forties and had never paid for a gallon of gasoline in their lives.

When the car was disabled, which was most of the time, he would call me to come get him so we could go riding around. As soon as I got to his house and went inside, while I was greeting his parents or talking to his sister, he would disappear. When I went outside, I would usually find him emptying the last of three five-gallon gas cans into my truck’s tank.

We spent many evenings driving around spotlighting and shooting rabbits around the fields or looking for rattlesnakes crossing the road, or backing over stop signs or turning doughnuts in the parking lots of either the Mormon or the Catholic church (sometimes both) or dumping perfectly timed cups of water off the freeway overpass onto the windshields of unsuspecting truckers. We were country kids, loose on the countryside.

After we graduated, he moved back to North Dakota, where he had been born and lived until moving to Arizona in our sophomore year. A few years later, he was back to work at a seasonal job in a cotton gin that was supposed to end that December. After it was over, he talked me into renting him a room in the little house that I had bought when I was 19. He claimed it would be no problem for him to get a job and pay his share of the expenses.

Weeks passed that then turned into months and he still had no job. I was working on a roofing crew at the time and talked the boss into putting him to work. My friend habitually showed up late, screwed around constantly, spent most of the day playing grab-ass with the rest of the crew and couldn’t seem to learn how to properly use a hammer. It wasn’t long before the boss was giving me the stink-eye along with him.

He had two or three paychecks under his belt before the boss finally had enough and told him to hit the bricks. None of the money from any of those paychecks ever found its way to me although he had been eating my groceries and soaking up my utilities. Oddly enough, that same day when I checked my mail, I had received my phone bill on which was a neatly itemized list of long-distance phone calls to various numbers in North Dakota that totaled well over $300. Needless to say, I blew a gasket. Naturally, he had no money as it had all been spent on beer when he was hanging out with some of the guys from work.

It seemed beyond wise to cut my losses at that point, and I invited him to bag up his crap and go live with one of those guys. He was indignant at my suggestion and left. About a week later there was a knock on my door. He stood there with one of the other guys from work behind him holding a box and wearing an irritated look. Without looking me in the eye and without any apology at all, he instructed me to unlock the back door.

“Why?” I asked, incredulous.

I slammed the door in his face so hard that I had to reset the door jamb the next day. I didn’t see him again and later heard that he had gotten a bus ticket from his parents and gone back to North Dakota.

A few years this side or the other of the 10-year reunion, he called me one night and apologized for it all. I accepted the apology knowing quite well that I shouldn’t expect a check to accompany it. I soon came to regret letting bygones be bygones because after that he got into the habit of calling me, especially in the winter time when he was ass-deep in snow and the wind chill factor in the one-horse town he lived in was approximately 47 below zero. He would always be loaded to the gunwales, and wanted to reminisce about all the fun we used to have in high school. It was the same phone call over and over. He wanted to relive the hits but conveniently omitted the flops that had come afterward.

I suppose what I’m trying to say with all this is that I have been content with regularly seeing the people who are still in the area. Granted, most of them are not the ones I ran around with in high school, but in most ways that’s probably better. There’s only one person who I was friends with then that I still talk to lately, and that’s plenty.

People just go their separate ways in life. It’s natural for us to grow away from people we’ve known. If we didn’t, we wouldn’t be so likely to meet other interesting people who then add to our experiences for good or ill.

I have been thinking that I should go ahead and bite the bullet and attend my next reunion. I’m becoming more aware of getting old, which I never really have before. It’s not that I feel older, but I’ve begun to notice that, on the rare occasions when I happen to watch a country music video, the “old” pickup trucks shown in them are of a vintage that we didn’t even consider old when I was in high school. Not only that, but all these damned kids I’m surrounded by in college keep referring to ‘90s music as “old school.”

I even heard Sir-Mix-A-Lot deejaying a radio show the other night called Explicitly Old School!

What the hell is that about?