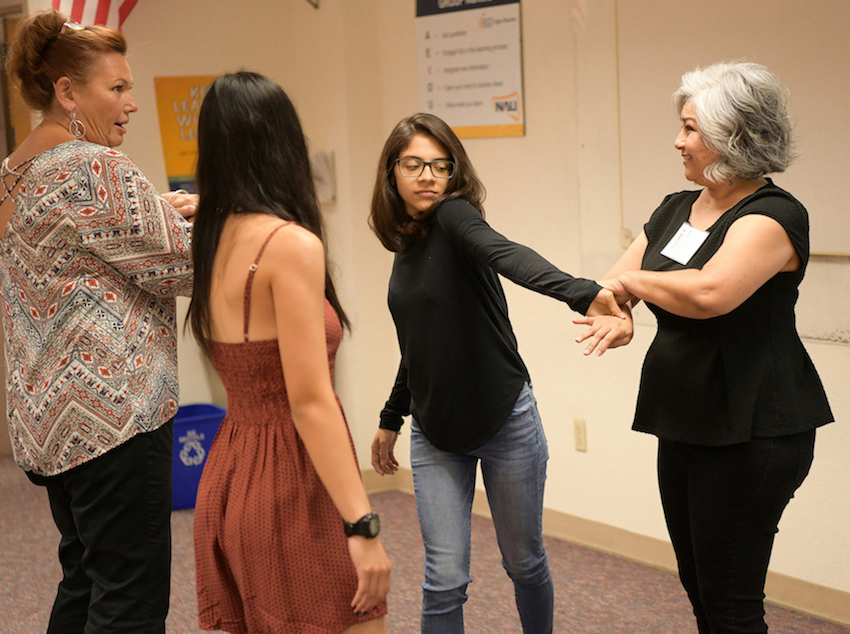 Erika Vasquez demonstrates one of her self-defense techniques during a breakout session at the regional conference held locally. Courtesy of AWC Photo Services

Female college students suffer one of the highest rates of violence of any demographic group, according to eight years of research by Erika Vasquez, an academic advisor who teaches self-defense class for women’s safety at Arizona Western College.

“I first decided to teach self-defense because of many stories I read about or saw on the news regarding the high percentage of college-age women experiencing violence,” Vasquez said.

In October, AWC held a regional mini-conference for women, called Yuma Women in Education. This conference, organized by Dr. Linda Elliott-Nelson, the Vice President for Learning Services, and Biridiana Martinez, the Admissions, Outreach and Recruitment Coordinator, was designed to help women become inspired, empowered and enlightened.

Dr. Elliott-Nelson and Martinez opened the gathering in the Schoening Conference Center on the Yuma campus, welcoming attendees and introducing all the session presenters for the breakout sessions to be held in the AC building.

Conference sessions included “Stand out Above the Rest: How to Dress for Success,” led by Desiree Gunderman, the Administrative Assistant to the VP of Learning Services. “Stress Management” was led by Gladys Brown, associate dean of Continuing Education, and “A Growth Mindset” was led by Robin Copper, an assistant in Administrative and Learning Support. Vasquez conducted a mini-class in self-defense to teach women how to get out of any dangerous situation.

“Martial Arts is a part of my lifestyle,” Vasquez said.

In her academic journey, Vasquez started with the Human Services program at AWC in the early 1990’s, then went at NAU–Yuma, where she earned a bachelor’s degree in Sociology. Ten years later, she got married, had two children and then re-married. She wanted to go on for a master’s degree and decided to do it in Leadership at Grand Canyon University. In all those years, her passion for martial arts was always there, and she ended up doing karate.

“Self-defense is not just a physical act of defending against an act,” Vasquez said. “Self-defense is a set of awareness, assertiveness, verbal confrontation skills, safety strategies and physical techniques that enable someone to prevent, successfully escape, resist and survive violent assaults, according to the Los Angeles Commission on Assaults Against Women.”

She approached his husband, Sensei Aguilar, who has taught Karate at AWC since 2000, to develop a self-defense class for female college students, and they presented their proposal to their supervisor, Jane Peabody, who made possible the course, now called Female Self Defense PER-155.

“The college has been very supportive,” Vasquez said. “I have had professors take my class and also have done presentations during different events on campus.”

In showing women how they can use self-defense techniques in their everyday life, Vasquez says three essential points to always have in mind are being aware, safe and assertive.

“Self-defense means empowerment” Vasquez said. “It is a skill that can save my life.”