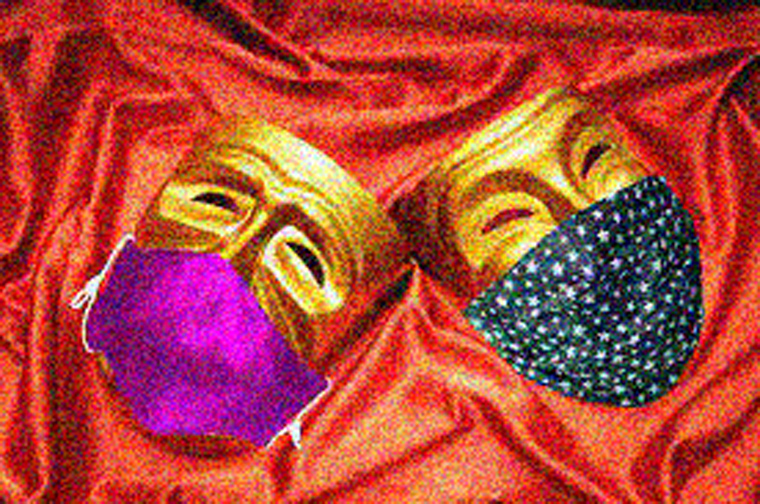 It’s been a tough year for everyone at Arizona Western College, perhaps especially the Theatre program, which since last year has not been able to do live presentations.

At the beginning of the pandemic, students were able to practice and perform their final scenes through Zoom.  n this way, students had the opportunity to receive feedback from the audience.

“It is a poor substitute for live audience interaction, but theatre people have always been innovative and found ways to perform,” Professor Wilkinson said.

Predictably, COVID-19 restrictions drastically changed the organization and practices of the program.  In order to maintain safe distancing protocols, face-to-face acting classes at AWC have been kept small.

“Not being able to physically interact with any closeness does change things,” Wilkinson said. “It not only alters the material selected for work.  Using masks makes vocal production challenging and affects required acting style.”

In the fall, the Theater program transmitted a script reading of Lenin’s Embalmers via Facebook Live. This outlet gave students a platform to share their work with an audience for the first time. After this, they began to showcase more of their in-class work to the Yuma community.

“Several students taped themselves reading books for Read Across America, and others participated in a video project which will stream on AWC’s site later this term,” Wilkinson said.

Currently, AWC’s theater program is working on the recorded production, though abridged, of William Shakespeare’s Twelfth Night.  For this performance, smaller groups are assigned to the various sections of the script, and each has the chance to record in their own individual style.  The department is looking forward on working with actors from the Yuma Union High School District, the Gateway Players and the Yuma Arts Center.

The live performance of Lenin’s Embalmers has been rescheduled for Spring 2021, and students now have the opportunity to prepare for their first live show since the pandemic started.

“We are working on a plan to mount the show live with a small, socially distanced audience at the end of April,” Wilkinson said.  “Rehearsals will start on Zoom immediately after Spring Break and then proceed to in-person rehearsals before opening.”

The Yuma Art Center supported the Theater program by hosting an AWC fine arts fundraiser on March 24 in the Historic Yuma Theatre, featuring a live performance by the Radio Active Variety Show.  The purpose of the event was to raise funds from the community for scholarships to be distributed among students in the various Fine Arts programs at AWC.

Wilkinson feels optimistic about the future of rehearsal and production in the Theatre program, and she hopes students can present their final acting classwork live at the end of term.

“Things are definitely not back to normal yet,” she says wistfully.  “Hopefully, the vaccines will take us back to whatever the new normal will be this Fall.”