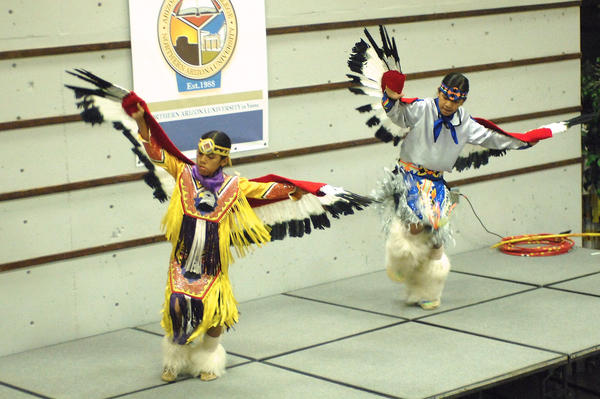 Most of the international students are from bigger cities than Yuma; some feel, at first, that Yuma is a tedious small town with not much to offer. They don't know much about the attractions or the history of the Yuma area. However, most of them also come from a colder climate, so they enjoy the warm winters here.

One international student, sophomore Dejan Milosevic from Belgrade, Serbia, isn't used to seeing much of the sun in winter. Milosevic thought Yuma would be boring with a hot climate that was hard to get used to. But in time he found that many area residents are very helpful to international students, making it easy to adapt to the different culture and he has started to find out about the attractions in the area, like the Colorado River which he goes to regularly.

Yuma has a year round population of approximately 135,000 residents. During the winter, although the population increases by 80,000 due to sun seeking winter visitors, affectionately known as "Snowbirds," which flock in from October through April each year. Snowbirds provide many opportunities to learn about the different cultures of other parts of the United States and Canada.

Some great places to visit in the Yuma County are the Kofa Mountain Range, Wildlife Refuge, and Martinez and Mitry Lakes. Hunting is a popular sport as the county offers many types of game. Major rivers in Yuma County are the Gila and the Colorado, both of which provide water sports of many kinds.

There are also a variety of annual events around Yuma. The Silver Spur Rodeo in November which is sponsored by the Jaycees, Midnight at the Oasis car show and dance bands, USMC Air Show, The Renaissance Faire, Jazz Series at the Mall every Thursday evening throughout the cool winter months, as well as many art and theatre presentations in the community and at the college.

Also, Thursday at the Theatre, the first Thursday of each month, offers Award winning, independent films with discussion afterward for those interested in sharing views.

Yuma County also is home to over 14 golf courses, a bowling alley, skating rink and four theatres, including the Historic Art Theatre and the AWC Theatre.

Some of the major attractions in Yuma County are the historical Territorial Prisons and the Yuma Crossing Historic Park. Yuma itself has a very colourful history, which lives on today in a fast-growing, vibrant community.

Yuma County is larger than the state of Connecticut. It is one of four original counties designated by the first territorial legislature. It maintained its original boundaries until 1983, when voters decided to split the county into two parts -- LaPaz County to the north and a new Yuma County to the south.

Much of Yuma County's 5,522 square miles of desert land are accented by rugged mountains with numerous trails to historic mines, log cabins and other places of interest for adventurous 4-wheelers and campers to explore or sand dunes for more excitement.

Several river valley regions, however, contain an abundance of arable land which is irrigated with water from the Colorado River to grow everything from lettuce and spinach to date and citrus trees. These valley areas have some of the most fertile soils in the world, having received silt and mineral deposits from Colorado and Gila River floods until the rivers were tamed by an intricate series of dams and canals. Just going to a small country store and sharing a date shake with a friend or trying some fresh prickly pear jam is a great way to spend an afternoon here.