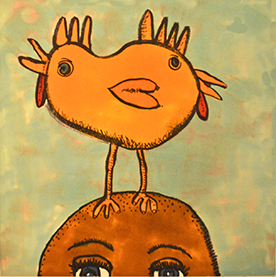 Samplings of Inklings in the Art Gallery

Students and faculty were gathered in small groups laughing, mingling, snacking on Twinkies, and wearing stick-on mustaches of various shapes and sizes while celebrating art and education.

An artist's work is featured monthly in the AWC Fine Arts Gallery, room AB110. On Feb. 18, Kathleen Farrell visited from New York for the opening reception of her exhibit, Samplings of Inklings.

Farrell is the gallery director and a professor of Visual and Performing Arts at Monroe Community College in Rochester, N.Y., where she was born and raised. Her art has been featured in exhibits around the country and as far away as New Zealand. She also has a permanent collection as a part of the Sketchbook Project for the Brooklyn Arts Library and has received several awards for excellence in teaching, creativity and professional service.

"I like to work in theme; I tend to go through an idea until it is exhausted," Farrell noted. "Art is meant to be fun, whimsical. I like to shake it up."

Whimsical is definitely a good word for her art. It is not the typical, pretty collection of paintings or sculptures. Farrell's artwork has energy and emotion. Ranging from paintings to assemblages of random objects, Samplings of Inklings features small selections from five larger collections that she created over a period of five years.

"As different as they may seem at first glance, they represent a continued dialogue I have with myself -- materials, imagery and what drives me to work every day as an artist," said Farrell.

One portion of her collection in the Gallery consists of several opaque-watercolor portraits called Strange Neighbors.

"When I see an interesting character who sticks with me in line at the grocery store, at the post office or just out for a walk, I go home, pull out my sketchbook and draw them from memory," Farrell said.

Other paintings on display are colorful submarines from the series Dirigibles and Submersibles and a quad of bright, cartoon armadillos respectively titled: Dilly DD, Dilly Attack, Dillo Cactus and Army Dilly.

Aside from paintings, varieties of wooden sculptures and what appear to be random groupings of odd objects are on display. A series called Boxes and Balls is meant to depict famous couples.

"I like to work with found objects, things discarded," said Farrell. "Oftentimes, the wood I use feels as if the piece has already been started by the person that discarded it.

"I like this aspect because it helps me get past that awkward starting point. The objects themselves are the catalyst that drives the work."

Although the assemblages and sculptures are very unusual, perhaps the works that are the most interesting and reflective of Farrell's true essence as a person and artist are her series of two-headed chicken drawings.

"It started a few years ago when I was making a valentine," she recalled. "I drew a heart and thought, ëWell, that looks more like a chicken.'"

Since that day, Farrell has been on a quest to draw the perfect two-headed chicken. The concept also stems from her interest in Siamese twins, dual personalities, couples and companionship. It is a work in progress.

Farrell made everyone in attendance feel welcome and comfortable. Maybe it was the fake mustaches or the sugar high from all the treats she provided, but the students were confidently engaging in commentary on Farrell's art and in consulting her on their own artistic endeavors. The entire evening she encouraged students to reach their career goals and never stop pursuing their love of art.

"Just do it!" was her parting advice. "Get on Craigslist. Buy material from someone who doesn't want it anymore. Dig through the trash. Just don't stop creating."

Farrell's Samplings of Inklings was on display through March 5. Currently on display in the Art Gallery is the work of Anna Wagner, professor of art at AWC San Luis campus. The reception for Wagner is scheduled to be held in and around the Gallery on Thursday, March 12, from 5-7 p.m.