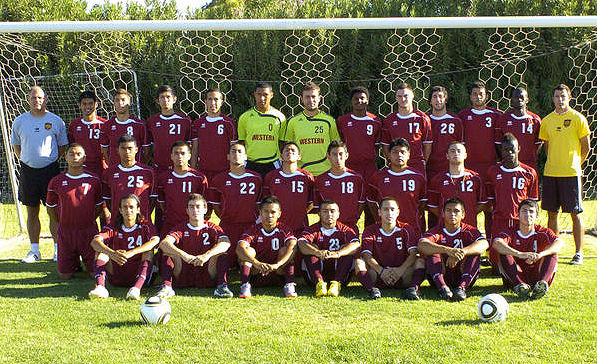 AWC's men's soccer team is heading into the 2010 NJCAA Region 1 finals on Saturday night. This year, the team consists of 9 sophomores and 20 freshmen. Many of the players are from far away, but made it here due to the dedicated recruiting efforts of Head Coach Kenny Dale and his assistants.

"We have one of the best groups of players ever for the AWC soccer team this year with all these guys from around the world," said Coach Dale.

The nearly 30 players from different parts of the country and different continents include international students Admir Balicevac from New Zealand, Kofi Owusu Ansah from Canada, Mohammed Takiyudin from Ghana, Caio Costa from Brazil and goalkeeper Milovevic Dejan from Serbia.

International players have been made to feel welcome and have had an easy time settling into the team. New Zealand student Balicevac, who played in U15, U17 and U19 national levels, is enjoying the style and the winning attitude of AWC Soccer.

"At first it was hard to adapt to the heat and the tough training schedule in pre-season," said Balicevac, "but all the hard work is paying off now with us winning games."

"Looking at the players we have, I think weÖmake a very good team this season," he added. "Every player knows their role in the field."

Takiyudin, 19, who comes from Feyenwoord Academy, can play as a strike and also on both wings. He sees some positive differences in playing here compared with in Ghana. Here, he says, "there are water breaks after every 23 minutes in each half and unlimited substitution." In Ghana, there are no water breaks and only three substitutions allowed in a game.

The rest of the players are all from the U.S. These long-distance travelers include Vitalis Atemafac from Washington DC and Anani Mohammed from San Francisco. Mohammed had a full scholarship to go to Yavapai College, but chose AWC instead.

If you'd like to see the guys in action, the NJCAA final conference match against Pima will be here on Saturday, October 30 at 6:00 pm at AWC. AWC boasts international soccer team