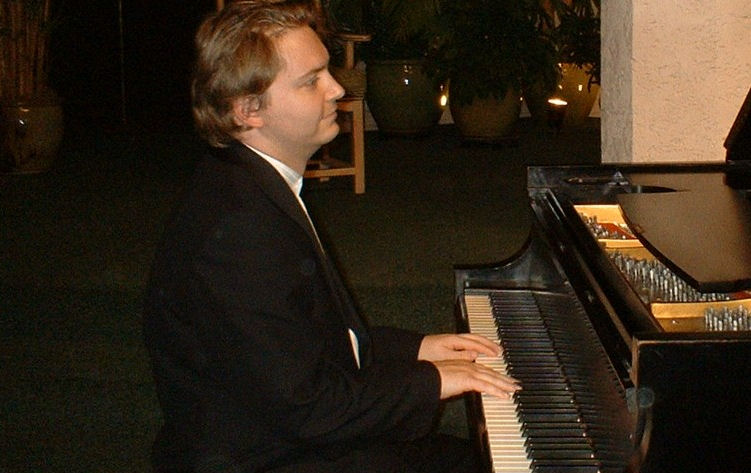 Professor Valentin Bogdan will give a piano recital December 19 at 5 pm at St. Paul's Episcopal Church in a duo performance with Julia Mortyakova.

Professor Bogdan is the winner of the commission composer competition earlier this year and is a recent addition to AWC's music department. "I have made one of my personal goals to make more people more interested in attending classical concerts and listening to classical music," said Professor Bogdan.

Valentin Bogdan grew up in Romania until his parents and he moved to the states in 1997 when he was 17. Professor Bogdan received his first piano at the age of four from his grandparents who were going to give it away until his mother said, "Let's wait and see if he'll pick it up," while she was still pregnant with him. Professor Bogdan's father, an engineer, had taught himself several instruments and gave Professor Bogdan his first lessons on the piano. Professor Bogdan also plays several other instruments including the saxophone, guitar, pipe organ, and the accordion as well, but says his strongest passion has and always will lie with the piano, whether it be composing or performing.

A piece of music Professor Bogdan enjoys listening to is Brahms first piano concerto, "it's in D minor and has everything in it; it has power, it has pain, it has lyricism and it's a wonderful piece. Brahms is one of my favorite composers. He was very misunderstood and wrote this piece for Clara Schuman. It was very badly perceived when it was first premiered because he was ahead of his time."

Professor Bogdan thinks music and art is not appreciated any less in the U.S than in Europe, but does notice a discrepancy in the way classical music is advertised. "I think they are appreciated equally, but the media here doesn't cover arts as much as in Europe. Europe still has classical music concerts and operas shown on national television."

Professor Bogdan feels it is vital to the genre of classical music for composers and performers to put an effort into attaining a loyal audience base much like is seen with pop musicians "but for some odd reason classical musicians don't really like to do that because they look at it like they don't have to promote their music. If people don't listen to it, then too bad for the. I say, well, it's not really like that. We must promote for the sake of the genre."

Professor Bogdan left his studies in Michigan to pursue his doctorate at the University of Miami. His dissertation was entitled, "The Classical Musician Entrepreneurship."

Professor Bogdan wants to be there for his students and make them feel welcome as his professors did for him. Professor Bogdan knows what the goals of his students are and is compelled to help them find the right path for themselves. Intro to music business is a class professor Bogdan is starting in the spring to give an in-depth look at the ins and outs of the business side of the music world. Everything from how to look at a contract to shaping a career path will be covered in this course.

The Florida State Music Teaching Associations, a branch of the National Music Teaching Association chooses a commission composer of the year. "As a composer, you are trying to find something that's not like somebody else, like a writer where you don't want to sound like someone else. My mother likes my compositions that sound more modern, whereas I know my dad is thinking what is this?" Professor Bogdan was picked in 2009 and recently premiered his pieces in November. He should hear the final results by the end of January.

Professor Bogdan wants our college to be the cultural hub of the city and is making the advertisement of classical music one of his many focuses including his duo piano concert.

Here are some examples of Dr. Bodgan's compositions: