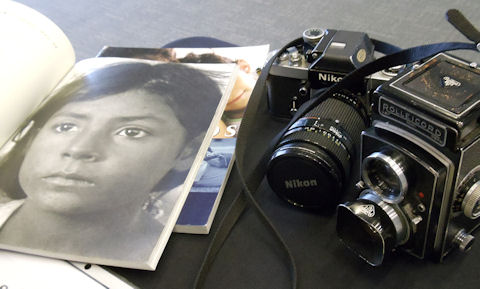 Arizona Western College was honored to have Pulitzer Prize-winning photo journalist Jose Galvez on campus March 21 to speak about his life and share his photographic work.

Galvez impressed the audience with his adroit commentary and his dedication to his life's work. He spoke of the cultural influence that growing up in Tucson had on his life's work. His interest in journalism started there when he began going to the office of the newspaper, The Arizona Daily Star, at the age of 10. Later, Galvez earned a degree in journalism from the University of Arizona.

After graduation, Galvez worked at the Star as a photographer and went on to become the first Mexican-American photographer for the Los Angeles Times newspaper. In 1984, Galvez and his Chicano colleagues won a Pulitzer Prize for a photojournalism series they did on Latino life in Southern California. Galvez is also known for his work documenting the work of Cesar Chavez, the legendary farm-labor organizer.

Photography was introduced into Galvez's life when he purchased his first camera from a pawn shop at the age of 16. His fascination with his art form has remained consistent throughout the years. His body of work has a singular focus his people and the life they lead.

"I love what I'm doing, and I hope to be doing it for many, many more years," Galvez said.

"This is not some project for me," he continued. "It is not something I'm doing for financial reward or for ego gratification. I do this so there will be a body of work that can be studied."