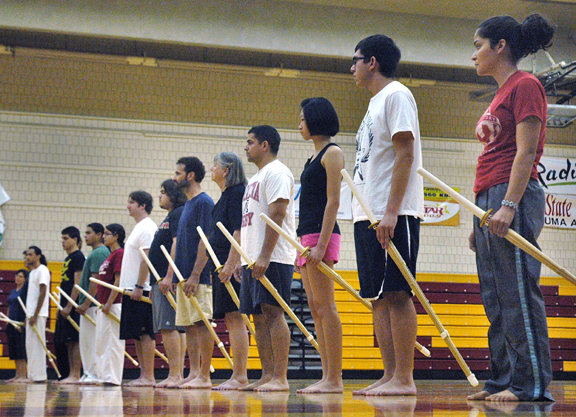 The way of the sword

This semester Arizona Western College students and local Yuma residents are offered a chance to learn and participate in the honored tradition of Japanese Kendo, a martial art that can endow students with an enhanced ability to concentrate and study

Professor Francisco Villa, Associate Professor of Biology with NAU-Yuma is the sensei (instructor). Sensei Villa, began his Kendo training in San Diego in 2002 while a graduate student at UC–San Diego, where he seized the opportunity to exercise his body and mind. He is now a 2nd-degree black belt, referred to as a nidan in Kendo culture, and is associated with the Southern California Kendo Association.

Kendo, which means “Way of the Sword,” originated in Japan almost a thousand years ago as sword training for samurai warriors. After World War II, Kendo was banned as a martial art but was reinstituted in 1950 as a school sport. It continues to be the number-one scholastic sport in Japan, comparable to football in America.

Kendo is practiced with a shinai, a sword constructed from four pieces of bamboo, and teaches stylized fighting forms, called katas, which are memorized and practiced.

“The practice of Kendo develops an appreciation of Japanese culture, weapons use in martial arts, fitness of the body, self discipline and mental discipline,” says Villa.

Villa intends to continue offering the classes each semester so new students can enroll and students from the previous semester can continue their studies. Classes this semester are held in the AWC Gym, and the public is welcome to come and watch.

Sensei Villa can be contacted at francisco.villa@nau.edu.