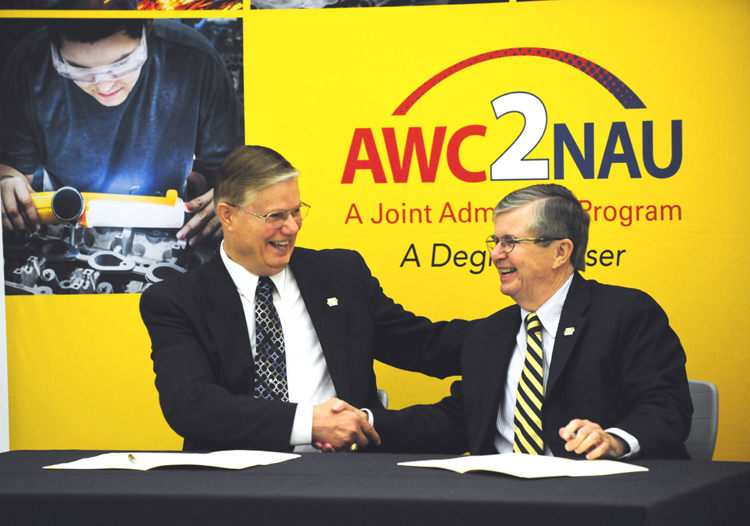 Our college's Golden Anniversary got even bigger on the morning of September 17, when Arizona Western College and Northern Arizona University, Yuma branch Campus, hosted a Rededication Celebration in the Schoening Conference Center to commemorate both school's anniversaries -- the 50th for AWC and the 25th for NAU-Yuma.

In addition to the celebration, the presidents of both schools (Dr. Glenn E Mayle and Dr. John Haeger) re-signed the agreement to solidify the academic partnership between AWC and NAU.

The variety of speakers during the ceremony began with a brief history of the partnership delivered by Dr. Larry Gould, NAU Yuma Branch Campus Executive Officer.

"NAU and AWC created a unique partnership that remains the envy of the other institutions of higher education," said Dr. Gould.

Dr. Gould also served as emcee during the ceremony and presented each speaker, including the presidents of AWC and NAU, Dr. Mayle and Dr. John Haeger. Both presidents talked about the benefits the partnership has for each school and its students, and were eager to sign the agreement pledging cooperation between so the NAU branch and AWC.

"We have the same goal in mind," said Dr. Haeger. "We want more and more citizens with higher education.

"The reason this partnership has always been so successful?" he continued. "Where you are educated, very often you will stay in that community and contribute positively."

Following the presidents, Joel Olea, graduate of AWC and NAU-Yuma, gave his testimony about how the partnership helped his education and successes. Olea received a Master's degree in Administration from NAU-Yuma and is now the Director of Public Works for the City of Yuma.

The last speaker was Daniel Barajas, Dean of Career and Technical Education, who spoke about how much a grant of $4.3 million has benefited the NAU-Yuma partnership.

"There have been investments certainly in the development of curriculum, but there have also been investments in facilities, technology that has been so needed, and personnel in order to make this happen," Barajas said.

The AWC/NAU partnership was established in 1988, but it began earlier when Dr. James R. Carruthers, former AWC president, wanted to formalize a relationship with NAU. Dr. Carruthers drew up a plan along with his staff for president Dr. Eugene M Hughes, then NAU president, to see whether this was a possibility for the Yuma community as well as NAU. When Dr. Hughes decided he could work with this plan, both presidents created a unique partnership that other schools would only wish to have.

The NAU-Yuma Partnership has been a great benefit to many Yuma students. As soon as they finish AWC classes, they can go next door and continue their university education at the NAU branch.

"NAU-Yuma benefits me in various ways," says Nohemi Valtierra, an AWC alumnus and a current NAU-Yuma student working on her M. ED in Human Relations. "It is convenient to work and attend a university locally, and cost-effective compared to other alternatives."

Numerous Yuma students have benefitted from attending AWC and transferring to NAU-Yuma without ever leaving home. One of these students, Mariana Mireles, says, "All my classes were available here on campus and online, and I was able to work full time attend my classes and graduate within the two year time period with honors."

As the NAU-Yuma and AWC partnership continues to grow, more students will benefit, and this community will have more educated and prepared citizens.