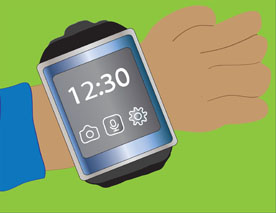 The future of time

Over the past decade, we have seen our world evolve at a rapid pace, thanks in large part to advancements in technology.

The most noticeable change has been the way in which we communicate. We have gone from phone calls, letters and meeting up in person to social websites, smartphones and video chatting. Although some people see this as a problem, most see it as a leap forward for our generation. Technology changes everything, and now it has revolutionized the way we check time.

Traditional watches tell the time, the date and perhaps even the current moon phase. Now, Google and even Apple are ready to take watches one step further. 2014 has been the year of wearable technology, the year that manufacturers go full speed into a brave new market. One that got off to a pretty good start on June 25, when the first smartwatches running Android Wear, the LG G Watch and the Samsung Gear Live, were released. The devices came out to mixed reviews, but overall delivered promising results for this new market.

These watches do more than just tell time; they become an interactive notification center. They are synced to a smartphone via Bluetooth. Once synced, they can access a phone's notifications and display them on their screen. The watches can also display what music is being played allow control over that music, display navigation directions and more.

Smartwatches also react to voices. They listen for the "Okay, Google" command and then can be asked about the weather, the score of a football game and even what the traffic on the route to work is looking like.

On September 9, Apple joined the race to the wrist with their Apple Watch. Its primary functions are similar to those on watches running Android Wear, but of course this watch is meant for people who are locked into the Apple ecosystem. In other words, it only works with an iPhone as its companion device

Despite all these features being packed into such a small frame, many people might stray away from these watches simply because they do not want to be seen as geeks. These watches all do have a square, geeky looking design that screams "tech enthusiast."

Luckily, some manufacturers already have thought of a solution. LG announced the G Watch R, a smartwatch with a round screen and a metal body frame. Motorola also stepped up to the luxury plate with their sleek, round-screened Moto 360. Both these devices look like traditional watches but pack the same features as their square-screened counterparts.

The future of wrist wear is looking positive. Many people today do not wear watches anymore because they'd rather just pull out their phone, which can do everything a watch can. Watches have become more of a fashion accessory. But with these new smartwatches hitting the market, we might soon be seeing them come back into the mainstream bigger than ever.