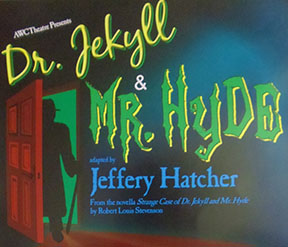 The strange bond between good and evil

"It's a psychological thriller -- a new version of Robert Louis Stevenson's classic tale of depravity, love and horror," says Ann Wilkinson, director and professor of Theatre.

Wilkinson enjoys choosing pieces that can keep the audience thinking and talking after the performance. This piece in particular focuses on the good and the evil of human nature.

"Anytime you flip on the TV, you find characters, like Walter White on Breaking Bad or Dexter Morgan of Dexter doing bad things for good reasons," states Wilkinson. "As a culture, we are really fascinated by that part of our nature. And, like Dr. Jekyll, as a society we keep hoping that we can find a way to control or modify our nature."

Wilkinson hopes that the audience will leave with the understanding that there is a harmony between good and evil, and it should be appreciated rather than suppressed.

The tale and themes

The tale takes place in London during the late 19th Century. The protagonist is Dr. Henry Jekyll, who struggles to keep his dark side, Mr. Edward Hyde, under control.

The story follows a lawyer named Gabriel John Utterson, who begins to investigate the unusual relationship between Dr. Jekyll and Mr. Hyde. Dr. Jekyll and his longtime friend Dr. Hastie Lanyon each narrate a portion of the story through a confessional letter.

This piece of literature is often associated with dissociative identity disorder, more commonly known as split-personality.

"Jekyll is well-educated and proper, due to his upbringing," explains Jacob Natseway who is playing the role of Dr. Jekyll. "He, like many men, struggles to control his own desires and urges, feeling the need to maintain his reputation as a respected professional. He is driven to find a scientific, rather than spiritual, solution to his dilemma."

Natseway holds a B.S. in Environmental Science and feels as though he can relate to his character.

"We're both scientific and rational, and we both have secrets we've yet to confess," says Natseway. "I empathize with him in his desire to purge the beast from man's nature. But I, unlike him, accept that it will always be a part of us."