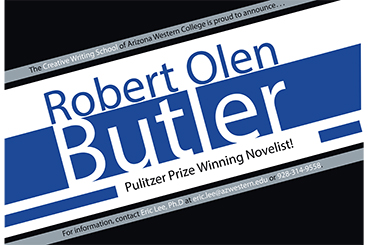 If you're lucky in this life, you will meet a mentor or two who will take you under his wing, show you the ropes, and broaden your perspective on a multitude of life's possibilities. For some, this might be a parent or first boss with a healthy dose of tough love. For others like myself, it will come in the form of a professor (who also happens to dole out healthy doses of tough love). Pulitzer Prize winner and acclaimed novelist Robert Olen Butler is such a man.

Among his many virtues and accomplishments, Butler has published 16 novels and 6 volumes of short fiction -- one of which, A Good Scent from a Strange Mountain, won the 1993 Pulitzer Prize for Fiction. He has also published a volume of his lectures on the creative process, From Where You Dream. He was the 2013 recipient of the F. Scott Fitzgerald Award for Outstanding Achievement in American Literature. He has also won the Richard and Hinda Rosenthal Foundation Award from the American Academy of Arts and Letters, a Guggenheim Fellowship in fiction, and two National Magazine Awards in Fiction.

Robert Olen Butler's fiction ranges from A Good Scent, chronicling the aftermath of the war in Vietnam, to Mr. Spaceman about the 16-fingered zoot-suited alien Desi, whose mission at the turn of the millennium is to study humanity and make his presence known regardless of the consequences, to Hell, in which evening news anchor Hatcher McCord schemes to escape his unfortunate fate in the afterlife.

These three volumes are far from the totality of Butler's life's work and creative genius, but they do demonstrate the range of his imagination and the darkest depths into which he is willing to plunge to weave stories that are poignant, humorous, sensual and rich in detail. To say Butler reinvents himself at each stage of his long career is an understatement.

His latest work actually spans three books in an espionage thriller that follows Christopher Marlowe Cobb, an American war reporter turned spy, who journeys from the Mexican Civil War all the way to Berlin into the raging conflict of World War I. A starred review on Booklist claims the work is "Character-driven historical fiction with melodrama and swashbuckling actionÖ. [Butler] holds the reader transfixed, like a kid at a Saturday matinee." The Wall Street Journal calls it "Zestful, thrillingÖ. Butler brings the era to vivid lifeÖa ripping good yarn."

No matter what you pick up to read by Robert Olen Butler, you will be in the hands of a master storyteller. I hope you clear your calendar for his reading at 6:00 p.m. on Wednesday, March 25 at the Historic Yuma Theatre downtown. I have it on good authority that he will be reading from his newest novel in progress, and we will be one of the first audiences to hear it. There will be a Q & A session after the reading, and books will be available for purchase and signing.

The event is free and open to the public, brought to you by The Creative Writing School at Arizona Western College and co-sponsored by KAWC 88.9 FM and the AWC Alpha-Zeta Chapter of the National English Honor Society. For additional information, please contact Dr. Eric Lee at Eric.Lee@azwestern.edu.