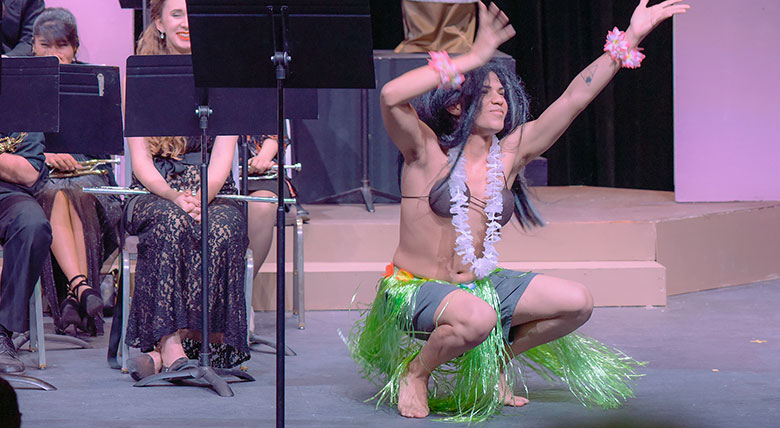 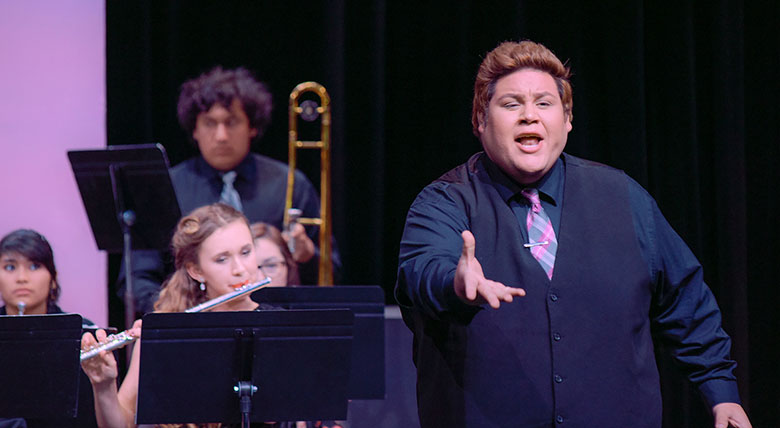 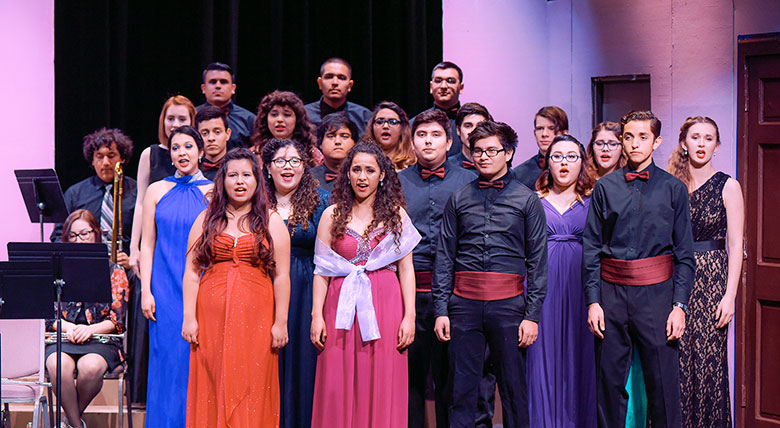 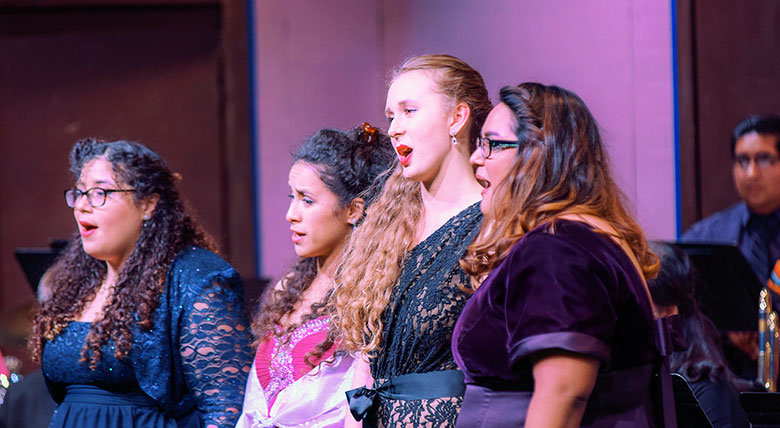 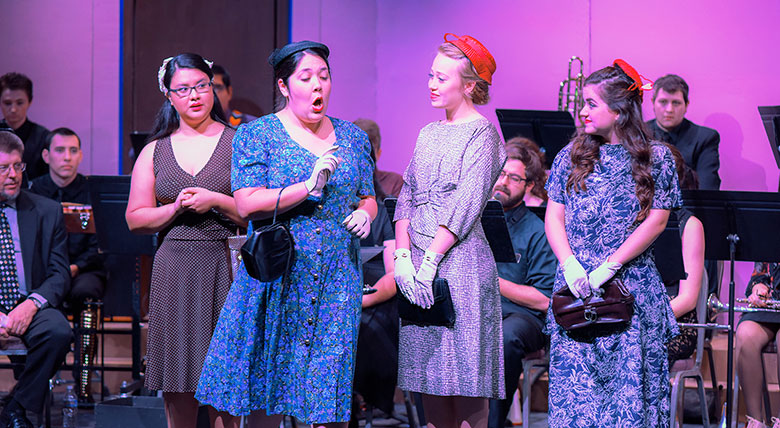 Before the advent of television in the ‘50s, American families would gather around the radio and tune in to a world of information and entertainment. It was radio’s golden age, where one could listen to plays like War of the Worlds in Orson Welles’ Mercury Theatre on the Air, classical performances of songs like George Gershwin’s Rhapsody in Blue and situational comedy programs like Amos ’n’ Andy.

Now that entertainment abounds in television, theaters, computers and even mobile devices, there’s not as much demand for radio shows. Nevertheless, radio continues to be a valuable medium for entertainment, and its history cannot be ignored.

It’s in celebration of this history and for the cause of funding scholarships that the Arizona Western College Fine Arts department presented the Radio Active Variety Show during the last weekend in February. It was a live performance of old-fashioned music and radio plays by AWC’s pep band, chamber singers and theatre actors.

With KAWC’s general manager, Dave Riek, as master of ceremonies, the show progressed in the manner of the typical radio program. The pep band, conducted by Dr. Shawn Pollard, would play big-band style classics from the ‘40s such as “Woodchopper’s Ball,” Zoot Suit Riot” and Glenn Miller’s “Moonlight Serenade.” To the audience’s delight, the trademark swing of the music from that era was recreated flawlessly.

The chamber singers, appropriately dressed in vintage shimmery gowns and suits with vests and bowties, sang slow tunes like “Shine On, Harvest Moon” and “Lonesome Dove” as well as jumpy tunes like “Boogie Woogie Bugle Boy.” The singers employed rich harmony to achieve that woozy swaying sound attributed to the music of that era.

In between many of these performances, Riek brought up previous beneficiaries of AWC fine arts scholarships and had them share how receiving help has made a difference in their lives.

“It was essential,” said past recipient Scott Gamble. “Last semester I had issues with financing, and I wouldn’t have been able to attend school if it weren’t for the scholarship.”

Gamble was also one of the performing actors and lent his voice to a soup commercial in the show. The skit involved a group of women in flowery gowns, white gloves and pillbox hats chatting about the amazing homemade flavor of Campbell’s chicken soup. The inclusion was accurate since Campbell Soup was a sponsor for Orson Welles’ radio show, which became The Campbell Playhouse in the late ‘30s.

A radio show of this kind is incomplete without a play of some sort, and AWCTheatre, under the direction of Prof. Ann Wilkinson, enacted a new play, South Dakota. The play was said to be based on a lost manuscript from Rodgers and Hammerstein, a famous musical writing duo responsible for hits like The Sound of Music and The King and I. For anyone familiar with their work, South Dakota was a hilarious combination of all of their most successful musicals. Among a few of the key characters, there were two governesses (Maria from The Sound of Music and Anna from The King and I), a King Von Trapp (from the same previous musicals), a deceased father and an angel (from Carousel), a cowboy (from Oklahoma!) and a humorous Aunt Bloody Mary (from South Pacific).

One of the greatest surprises, however, was the guest artist, Justin Lujan, a previous vocal student of AWC’s professor of vocal music Deltrina Grimes, who was essential to making the variety show possible. Lujan, along with a charming group of male chamber singers, sang “Sit Down, You’re Rocking the Boat,” a fun number from the musical Guys and Dolls. Later in the show, he would showcase his tenor voice in a stunning rendition of “Serenade (Overhead the Moon is Beaming)” from the operetta The Student Prince.

In order to achieve that level of rich singing witnessed at the show, Lujan said that he had to do a lot of practicing.

“If you think you’re done practicing, you probably need to practice more,” he said. “That’s true for anybody, amateur or professional. Pavarotti practiced every day. The voice is like a muscle – you don’t expect an athlete to stop warming up their body and then expect them to play in a game. As a vocalist you constantly have to keep your vocal chords in check, so I always practice.”

Events like the Radio Active Variety Show are made possible by the people, like Deltrina Grimes and Ann Wilkinson, who put it together and more importantly, the people who assist them by performing.

“The most frustrating thing I deal with here are the number of musicians I know who are here, who could play with us and whose presence would make a big difference, but don’t,” said Dr. Shawn Pollard, director of the pep band’s director.

In other words, the more students that are actively involved in fine arts, the merrier. By raising funds for fine arts scholarships, the variety show will hopefully bring more people who can make the dreams of Dr. Pollard and other professors come true.

The night ended with the choir singing the AWC anthem, “Ye Matadors,” and “So Long, Farewell” from The Sound of Music. After that appropriate bidding adieu, the band beautifully performed “Moonlight Serenade” to conclude the event.

The only flaw with the variety show? It was all over too soon.

“The band played really well, the choir sang well, the student actors did a very nice job, and Dave Riek was the perfect host,” said Chuck Smalley, a part-time music professor who taught at AWC full time for 32 years.

To keep making events like this possible and support fine arts at AWC, there are plenty of AWC theatre productions and concerts to visit every year. Look out for them next time you pass posters on campus or browse AWC’s website.