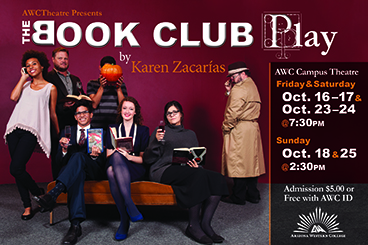 Small talk is mumbling through the air as you're sitting down with your play program reading through the cast. Suddenly, the voices fade, and the lights dim as the curtain unveils the first seen of Arizona Western College's production of The Book Club Play.

TBCP, written by Karen Zacar as and directed by AWC Theatre professor Ann Wilkinson, is a comedy that follows five members of a book club that has been selected to be the subject of a documentary. The leader and founding member struggles to keep the club under control as a new member is introduced and threatens to disrupt the overall nature of the group.

But let's not get ahead of ourselves.

AWC sophomore and Theatre major Erin Natseway is the play's stage manager, whose responsibility, among others is running production meetings to ensure that everything behind-the-scenes is being done on time. She has found that the easiest job of producing the play has been finding a crew. In contrast, the most difficult part is having so many people in the crew to juggle.

Natsaway read the script last semester and says she felt a connection to each of the characters.

I remember laughing so hard that I could barely breathe, she said.

The preproduction preparations for an AWC play, which usually take about two months, include analyzing the necessities of the set, the personnel and, most importantly, the audience demographic. For this particular production, the director began coordinating her vision during the summer. The rehearsal process, which began the second week of school, will go on right up to the performances.

An aspect that sets apart this play from those of the past is that the play is performed as though the characters are on camera; that is, they are being filmed within the story. Also, there's a bit of acknowledgment of the fourth wall, meaning that the actors self-consciously talk about being in a play.

The play takes place in the present-day U.S., a fact that Natseway feels will help the audience relate to it.
If you love books, people and Twilight jokes, you'll definitely love this play, she said.

A big bonus to seeing this play is witnessing the recent renovations in the Theatre building. The green room has been remodeled, and new high-quality lighting with updated light and soundboards have been installed, along with a slew of accommodations made for both the audience and the theatre crew.