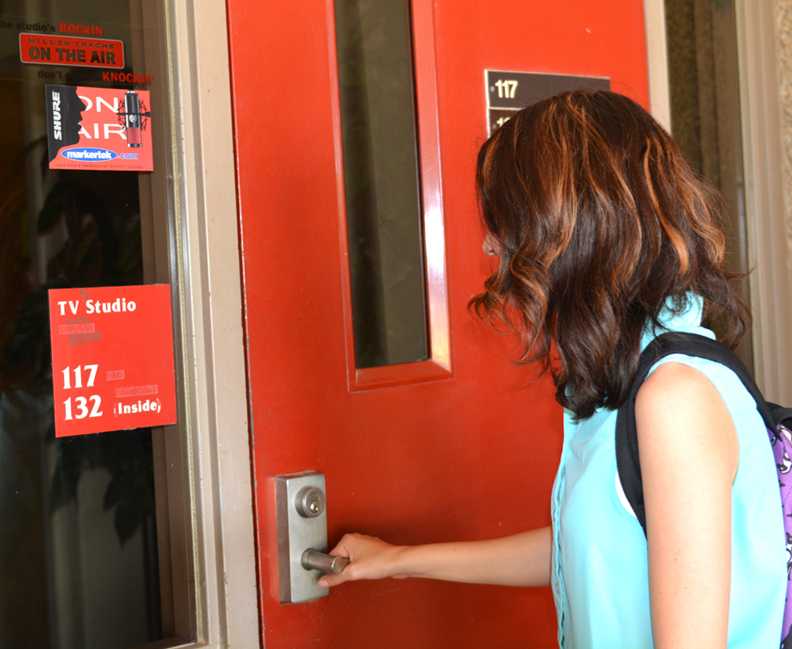 Hugger-mugger in the studio

Watching other people's lives on TV is something that attracts us all.

Arizona Western College has its own television station that broadcasts shows to the greater Yuma area on channel 74. The same shows are also uploaded to YouTube and streamed online. The station is run by Sherry Needham, who is the Director of Television Services; Troy Baughtman who, along with Needham, is an instructor at AWC, and Travis Mitchell who assists but does not teach. The TV station/studio is located on campus in room BA 117.

Originally, the space was an old accounting classroom that had to be converted into a studio. Needham has been the studio's director of Television Services since the beginning and is always trying to help students take advantage of the volunteer and internship opportunities her department provides.

Although no shows are currently being filmed in the studio, the station is broken up into the categories of staff shows and student shows, mostly operated by students. Most of what is aired or streamed is filmed in the field.

A regular show on the channel is Bull Ring, put on by the AWC basketball coach. BA 117 is also used to give regular weekly tours for new, current and prospective students interested in pursuing a career in broadcasting and offer them a chance to see the equipment and talent that is required for a TV station to run properly.

"We have students operate the studio so that they feel like it's theirs, so that they can have a foundation to build on when they are out in the real world," says Needham.

A great deal of time and energy goes into producing a TV show. Not only are there the people on camera, but there are also so many others off camera making sure that everything is in its proper place so the show runs smoothly. The studio needs everything from a set and control room to cameras and lighting. The AWC studio has three cameras that are in constant rotation when filming, being controlled by the director and the floor manager, who is the go-between.

The search for on-camera talent is never-ending. People who graduate or decide to pursue a career in a different field make it difficult for the station to run an ongoing show in the studio.