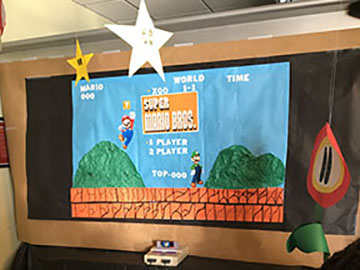 Who's the spookiest in all the land?

The annual Office Decorating Contest was back for its eighth year -- probably the spookiest one yet. This year six departments participated, including last year's winners, the AWC Somerton Office and the Somerton and San Luis Rotaract Club.

There are no rules, though, regarding the height of the decorators' creativity! As long as everything was done safely, the office could be scary, cute, creepy or just plain Halloweeny. There was no actual prize for the winners other than massive bragging rights, but it was all in the spirit of fun.

This year, the variety of offices participating made it a bit harder for the judges, who were looking for originality, evidence of a theme, a good attention grabber, interaction with participants and attention to detail.

Most likely, a great team is the reason why this year's winners took the gold with their Mario-world inspired office, which recreated the Nintendo game and brought it to life. Intricate details of the game covered the room, making the short play all the more real.

Another scary season has some and gone, and that leaves another year to plan an office concept to blow everyone's mind. Those who want to make sure they're part of the fun should contact Student Government Association for more details.