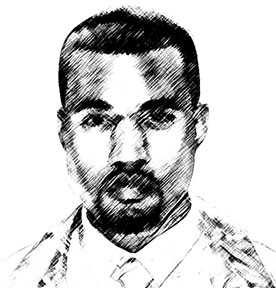 We have a bit of time until the 2016 elections, let alone the 2020 elections, but we already know one name will be on the ballots -- music artist Mr. Kanye West.

After being handed the Vanguard Award, West gave a long speech about his infamous meeting with Taylor Swift and picking up fresh juice at the grocery store with his daughter, along with a multitude of other ramblings. Fast forward through 17 minutes of this, he finally drops the announcement that he plans to run for president in 2020.

"And yes, as you probably could've guessed by this moment, I have decided in 2020 to run for president!" said West followed by an uproar of applause as he walked off the stage.

As absurd as the announcement was, there has been a massive following of Yeezus fans who aren't opposed to the idea.

The next day, the official Democrat Party sent out a welcoming tweet to the artist that read, "Last night @kanyewest declared his candidacy for president in 2020. Welcome to the race, Mr. West. Glad to have you."

West's announcement has even been able to attract the interest of (real) presidential candidate Hillary Clinton, who had some advice for him during an interview with Extra: "Well, if I'm going for my second term, to wait four years, but if I'm notÖbe sure he has comfortable shoes because there's a lot of walking involved."

Of course a truckload of people are behind his crazy train, but there are quite a few more who are just "not-about-that-life."

SMOSH, a popular YouTube channel with a hefty 21,252,734 million followers, posted a video called "If Kanye Were President." This parody exaggerates every insane aspect of West including his reality-star wife, Kim Kardashian-West. SMOSH even predicted that West would rename the White House as the Black House and film a T.V. show similar to his wife's family show, Keeping Up with the Kardashians.

The video does give us a glimpse into what the future may hold with Mr. West as president. This portrait of him may be a bit exaggerated, making him seem a little less than intelligent. But, hey, he's asking for it.

West gives the impression that he has some good ideas, claiming to "listen to the kids" when it comes toÖ. Well, he never got that far, but it's a start. He does seem to be a great father to his only daughter, North.

It's hard to say whether Kanye's announcement has any truth to it, but like everything there are pros and cons. Of course, it would be an interesting time for America if he were president, but do we really need a fashionable egomaniac as our Commander-in-Chief? You have a few years to make up your mind.