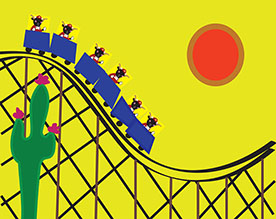 Yuma has a lot of attractions like Yuma Territorial Prison for winter visitors who stay only a few months. However, what about the ones those stay here all year round?

Many of Yuma's youth feel they've been forgotten. They consider Yuma to be boring in terms of entertainment because it lacks attractions or hang-out spots for young people.

Those between the ages of 13 and 25 face this situation every time they try to have a little fun around the town. Let's face it, activities such as the Waylon's Water World and Gateway Park on the edge of the river are great entertainers during the summer. But what about those other seasons when it isn't hot outside?

Several youngsters have come up with some ideas for year-round attractions. Stephanie Coronado suggests "a desert-themed park that combines the desert's wildest animals with a cobra roller coaster." Imagine it -- a desert theme park here in town with animals similar to a zoo or even Sea World.

Another great idea was from Lucia Figueroa -- "a dance club for young adults under 21 to socialize, with a taste of an actual club -- but without the alcohol, of course."

The type of attractions that will make history would be either an outdoor arena or an inside stadium for sports or musical concerts. Downtown Yuma is known for being historic, so why not add a drive-in theater to enhance that retro theme?

Annual fundraisers should be held by the city's youngsters in order for them to obtain more entertainment as they wish. Such activities would help them not only to build their entertainment spot, but also to build character by working hard for something they want instead of easily obtaining a reward for nothing.

Money gained from the fundraisers will go towards building each piece of whatever they choose as their hang-out spot. Such a plan would need to be a collaboration of young people in the community, the city government and anyone else who wants to contribute with making history for future generations.