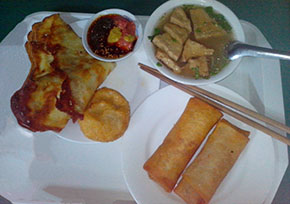 There is a folk idiom in China, "Hunger breeds discontentment."

According to my great grandfather, Chinese traditional cooking methods originate from oral records between young people and their teachers. When asked about which is the most delicious food in Chinese catering industry, even if some cooks argue that a royal snack is the delicious food of the ancient emperors, most people always choose the food of the common people. Three of the most famous Chinese cuisines are Beijing, Confucian and Sichuan.

Food of the capital
The northern Chinese like to eat traditional food such as Beijing Roast Duck and Dry-Fried Meatballs. An old saying in Beijing is that "food cures better than medicine." Not only does Beijing cuisine have at least 20 different cooking methods -- fried, boiled, stew, burnt, baked, steamed and so on -- but it also provides all necessary human nutrition.

For instance, Spring Pancakes are one of the most popular foods there. Baking the bread dough as a skin, they cook a lot of vegetables, such as leaks and bean sprouts, and then roll them in the Pancake. The vegetable stir-fry provides all the vitamins, cellulose and protein people need. Eating the Spring Pancakes can help people find old memories and stories because many famous restaurants, called "China Time-honored Brand," are located in the center of the old districts.

Bringing people together
The eastern Chinese prefer Confucian cuisine, including well-known dishes such as Babao Bean Drum and Candied Floss.

Confucian cuisine represents Chinese traditional cuisine, in which most cooks use steaming and boiling. Tai Chi Tofu is one of the most representative foods of Confucian cuisine. Cooking meat and scallions as the decorations, cooks put them in the bottom of the bowl and then put the tofu and seasoning on the top. Facing the bowl, the tofu looks like a picture of Tai Chi.

The Chinese often use common sayings like "two heads are better than one" to describe the importance of holding friends together; and the great Chinese philosopher Confucius once said, "All within the four seas, Chinese are brothers." These sentences tell us that lots of cooks always study different kinds of cooking methods, especially cooks in fancy restaurants.

Obviously, under this historical condition, cooks prefer to make friends with their diners. The more frequently we come to the Confucians' restaurants, the more friends we would meet.

Thick & spicy
The southwestern Chinese like to eat Sichuan cuisine, which impresses people, both famous and profound, with its thick spicy sauce. Because of the humid climate, cooks will prepare a lot of hot seasoning and fillings with their food. They eat a lot of fish and meat, and hot seafood is the staple in people's lives.

The most common public food in the Sichuan province is Kong Pao Chicken, the hottest food in China. This name comes from a historical personage Gong Pao, one of the most famous philanthropists in the Qing Dynasty, who always helped others and shared his money with the poor. Everyone knew his best food, stir-fried chicken, so they cooked the chicken with some hot seasoning, and gave a special name to remember this person.

In conclusion, everyone should try these delicious Chinese cuisines -- Beijing, Confucian and Sichuan -- and not merely eat the food they're used to. With a focus on nutrition and flavor, traditional food has become an important part of the Chinese colorful history.