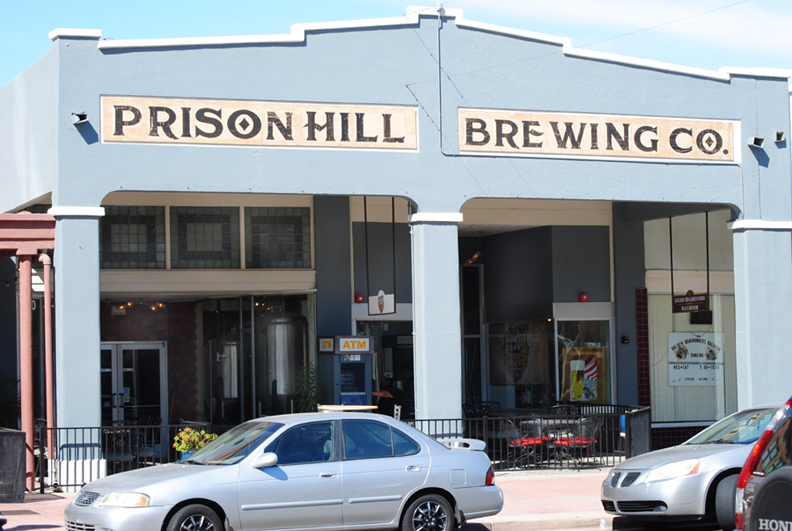 How does someone go from having Green Day crashing on his couch to owning a successful Yuma restaurant? Ask Yuma native Chris Wheeler, co-owner of Prison Hill Brewing Company in downtown Yuma.

But there's more to Wheeler than either of these accomplishments. This graduate of Kofa High School and the University of Arizona has three undergraduate degrees -- in Psychology, Chemistry and Molecular and Cellular Biology -- as well as a graduate degree in Clinical and Applied Neuroscience.

"I got into brewing because I like beer, and when I was about 19 I didn't have a fake ID," says Wheeler. "I was tired of waiting for people to buy me booze, so I ordered a beer-making kit out of the back of Rolling Stone magazine. It was cheaper than the beer I had bought before, and it was often better."

Wheeler says that one key to making good beer is a good source of water. Many of the recipes he has been brewing and perfecting for fifteen years have now made their way onto Prison Hill Brewing Company's menu, except now on a far larger scale.

When he was in school, he watched his group of friends smoking a lot of dope and doing a whole lot of nothing, and he always asked, "What in the world are you guys doing?" Other friends got into sports or theatre, which he had no patience for. Instead, he got into punk rock when his friend Greg Rushin left a tape of the band Agent Orange in his stereo. Around that same time, there was an import section at the local record store that sold vinyls, and he thought the cover of a certain album looked cool, so he bought it.

"I literally put the needle to the vinyl, and it changed my life," he said.

Wheeler enjoys punk rock because of its fast pace and one to two minute songs with people singing who had education.

"A lot of the bands I listen to have Ph.D.s fronting the bands," he says. "Bad Religion is fronted by a guy who has a Ph.D. in Zoology. No Bad Oil is fronted by a lawyer. The guy who fronts the Descendants has a degree in molecular and cellular biology -- the same degree I have."

Wheeler describes how bubblegum pop on Top 40 radio used words he had learned in second grade, but with punk rock he would often find himself using the dictionary.

"Too many people abandon their education for the simple and benign, and that's not for me," says Wheeler.

This path of a good education and a love for punk rock led him to buy a house in Tucson where he rented out two rooms which would often be a place for traveling bands to crash after they played downtown. One band who crashed at Wheeler's place in its early days was recently inducted into the Rock and Roll Hall of Fame -- Green Day. The band performed in his back yard, and the picture for the back vinyl cover of the 1992 Green Day album Kerplunk was taken at that backyard performance.

For a number of years, Wheeler owned a medical business, which he sold in 2009. When he moved back to Yuma in 2010 to be closer to his parents and to raise his son, he took a job with the YMCA. Near the end of that project, his current business partners approached him with the opportunity of starting a brewery, knowing he had experience brewing as an undergrad.

"The hardest part was getting the federal licensing and everything to become a brewery since breweries are considered manufacturers of a highly taxable good, and that is something that the Feds super-regulate," says Wheeler.

The status quo has never fit Wheeler well, so he chose a path of becoming a well-rounded, well-educated punk rocker-scientist-brewmaster who always strives for greatness even if it takes him out of his comfort zone. He's a prime example of his own motto, "It's good to be different for the sake of being different."